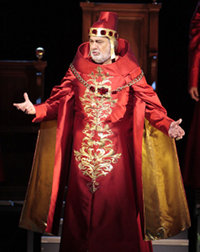 More than a century and a half after composition, the operas of Giuseppe Verdi dominate the operatic canon. A half-dozen or so of his operas are among the most widely performed in the world. But Verdi wrote 28 operas, some of which, like The Two Foscari, have languished in obscurity. And one wonders why, when the music is so charming and the plot so imbued with drama. We can only hope that LA Opera’s production, directed by Thaddeus Strassberger, will bring this opera greater recognition than it has received up to now.

The story of The Two Foscari began as a play that Lord Byron wrote in 1821. Known as his Venetian tragedy, the play’s plot was lifted intact from the history books Byron had at his disposal. The story takes us back to mid-15th-century Venice, where the long-reigning Doge, Francesco Foscari, is presiding over the trial and sentencing of his only remaining son, his other four having been lost to the plague. His son, Jacopo, is accused of sending traitorous letters to Venice’s archenemy, the Duke of Milan, and also of murder.  Nothing much happens—the son is imprisoned inside an iron cage for most of the opera, while he, his father and his wife bemoan his fate.

But upon this simple framework is hung the most delightful music—sometimes poignant, sometimes sad, sometimes lyrical, and always sentimental. As usual, conductor James Conlon coaxes a fine, dramatic reading from his musicians as we are treated to song after song that define the idea of Romanticism. There must have been five waltzes alone. This is crowd-pleasing music, as evidenced by the number of people I heard humming airs on the way out of the Dorothy Chandler Pavilion.

Another reason the crowd loved this opera was the quality of the singers. The Italian tenor Franceso Meli, making his LA opera debut, made an immediate impression with his strong, clear voice, even though he was somewhat difficult to see inside his cage. Even better was Marina Poplavskaya as his wife Lucrezia. Her soprano was delivered with such power, you felt it could shatter your opera glasses. Even during the scenes with a full chorus, you could clearly hear her individual voice. And then, of course, the maestro—Plácido Domingo as papa Foscari, his first time in this role. Looking every bit the rock star, with silver locks flowing past his shoulders, Domingo showed no evidence of diminishing powers. His duet in the first act with Poplavskaya was particularly moving.

The production values were also a highlight. The set consisted of a U-shaped arrangement of skewed buildings, with a bridge that connected the two on each side (an obvious reference to Venice’s infamous “bridge of sighs” where prisoners made their final walks after sentencing). The bridge also served as a high platform for several gatherings of the chorus. The bottom part of the buildings had all crumbled away, leaving the remaining buildings only propped up by thin pilings, an apparent reference to the foundations of the Republic being undermined. Indeed, the real Foscari’s reign, marked by huge increases in debt, was the beginning of the end of Venice’s dominance in the world. A warning, perhaps?

The costuming was also worthy of note, thanks to costume designer Mattie Ullrich, also making her LA Opera debut. The garb of the chorus was particularly striking, with the women wearing gauzy white confections that covered most of their heads, like beekeepers, while the men wore tailored black or red floor-length tunics. The hats were especially interesting in their variety of weird shapes. When the town folk turned out en masse to celebrate carnevale, the whole raucous affair had the feel of a Renaissance Hunger Games, like some otherworldly ritual we were watching that was bound to have a bad end.

The Two Foscari is a tragedy, undoubtedly; I doubt it’s much of a spoiler to say that everyone dies at the end. It’s an apt paradigm for the death of Venice. Perhaps if someone like Wagner had created the music, it would be easier to feel more of the profound emotion inspired by true tragedy. But with Verdi’s light and frothy music, it’s easy to shrug off the plot complications and continue furtively air-conducting until the final curtain. When the eyes and ears are taken care of so well as they are here, the brain can take a siesta. The Two Foscari is the sleeper of LA Opera’s recent productions and just may turn out to be your favorite.

The Two Foscari continues on Sunday, Oct. 7, at 2 p.m. and Tuesday, Oct. 9, at 7:30 p.m. at the Dorothy Chandler Pavilion in downtown Los Angeles. Visit www.laopera.com.