LA Opera’s season has already begun, promising music lovers a trip around the world in the company of some fascinating characters, like Romeo and Juliet, Simon Boccanegra, Albert Herring and Eugene Onegin. 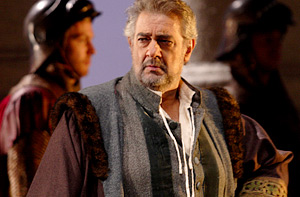 Things kicked off with Tchaikovsky’s “Eugene Onegin,” which continues through Oct. 9. This Romantic Russian opera, based on the classic verse novel of the same name by Alexander Pushkin, is a company premiere from the Royal Opera House, Covent Garden and Finnish National Opera. It stars Oksana Dyka and Dalibor Jenis as Tatiana and Onegin. This production marks only the second time LA Opera has mounted a Tchaikovsky work.

Mozart’s comic “Così Fan Tutte” presents another rare opportunity: it hasn’t been on stage at the Dorothy Chandler Pavilion in 15 years. It runs through Oct. 8. Featuring period staging by director Nicholas Hytner in a production from the Glyndebourne Festival Opera, “Così Fan Tutte” has a clever and entertaining plot about two young men testing their lovers’ faithfulness. The title translates from the Italian as “Woman Are All Alike.”

Gounod’s “Roméo et Juliette” runs Nov. 6-26. This French version of the story of literature’s most famous lovers is a revival for LA Opera, conducted by Plácido Domingo. Tenor sensation Vittorio Grigolo makes his company debut as Roméo, and Nino Machaidze returns as Juliette.

Plácido Domingo performs the baritone title role in Verdi’s “Simon Boccanegra” Feb. 11 through March 4. James Conlon, internationally recognized as a master of Verdi, conducts. Described by LA Opera as a “grand-scale study of power and treachery,” this Italian opera “finds an emotional center in the tender and unbreakable bond between father and daughter.” This production from the Royal Opera House, Covent Garden is a company premiere. 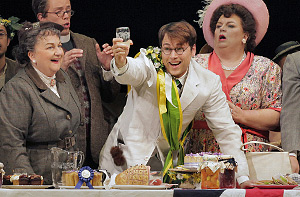 On stage Feb. 25 through March 17 at LA Opera is “Albert Herring” by Benjamin Britten.

On stage Feb. 25 through March 17, “Albert Herring” is the second in a series (after last season’s “The Turn of the Screw”) celebrating the upcoming centenary of the birth of British composer Benjamin Britten. In this production from the Santa Fe Opera, American tenor Alek Shrader makes his company debut in the title role, a comic character who becomes May Queen by virtue of his being the only virgin in his English country village.

A true warhorse, Puccini’s “La Bohème” returns May 12 to June 2. Rising young American singers Ailyn Pérez and Stephen Costello star as the bohemian young Parisians Mimi and Rodolfo in this heartbreaking story of opera’s most famous lovers, sung in Italian. This is a revival of an LA Opera original production.

Get a behind-the-scenes look at LA Opera as it celebrates its 25th anniversary with an Open House from 9:30 a.m. to 5 p.m. on Saturday, Nov. 5. They’ve planned a series of free activities to showcase the fascinating world of opera at the Dorothy Chandler Pavilion.