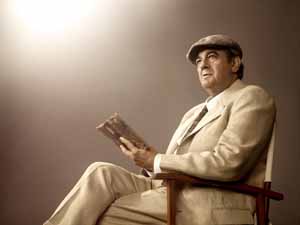 LA Opera‘s world premiere production of Il Postino offers up the latest iteration of a work that seems destined to become an enfant d’oré of the modern cultural lexicon. Based on the 1985 book Ardiente Paciencia by Chilean author Antonio Skármeta, it tells the story of Mario Ruoppolo, a lovelorn mailman on a small island, and his fleeting friendship with Chilean poet-in-exile Pablo Neruda. Fans of the 1994 Oscar-winning Italian movie loved its potent brew of poetry, longing, romance and luscious Mediterranean locations; only the churlish could find it anything other than utterly charming. The opera, however, is not the movie and therein lies both its strengths and weaknesses.

This is Mexican composer Daniel Catán’s fifth opera, but the first for which he has also written the libretto, which happens to be in Spanish. The longtime Pasadena resident chose to hew closer to the book (and 1985 Chilean movie) by shifting the focus of the story from a boy-gets-girl romance to the relationship between Mario and Pablo — a bromance, if you will. He also reintroduces the historical and political underpinnings of the story with references to Neruda’s Communist ideals, which in turn inspire Mario and ultimately lead to his tragic fate.

Problem is, by navigating away from the Scylla of a pat romance story for musings on art, friendship and poetry, Catán has sailed head on into the Charybdis of emotional boredom. Once it is clear that Mario and Beatrice’s romance is merely a perfunctory canapé, incidental to the main course of Mario and Pablo, whom or what are we really to care about, especially since the latter pair part ways at the end of Act II? It feels as if we are meant to be sated by the substitution of art and politics, which is fine as far as it goes, but that is a decidedly thinner gruel, is it not?

That said, Catán has made good use of Neruda’s sublime poetry, going so far as to put some of it into the libretto. At times, poems written in Neruda’s actual handwriting are projected onto the back wall, making an effective visual counterpoint to the poetry being sung. There is also a good helping of humor, especially in the lighter first half, and the audience was game to go along.

For me, the story was a lesser problem than the sets. If you expect to be charmed by the rustic fishing village atmosphere celebrated in the movie, you’re in for a disappointment. Scenery and costume designer Riccardo Hernandez is known and celebrated for his minimalist sets, but such austerity doesn’t work very well here. A few pieces of furniture constitute the totality of each scenic tableau, most of which slides up and down the stage on skids. Then there was the omnipresent patterned blue floor, which I suppose was meant to recall painted tile; but from the balcony, it looked distressingly similar to the carpet you might see in the Grand Ballroom at a Hyatt. I will give a thumbs up to the lighting designer, Jennifer Tipton, who in her LA Opera debut managed to add back a good deal of the atmosphere that was otherwise missing.

Catán’s music (ably conducted by Grant Gershon) was very nice — a bit like a mashup between Debussy and Stravinsky, with a hint of Strauss lurking in the shadows. While most of it would not inspire tune-humming on the car ride home, there was a memorable bit at the wedding scene where one of the fishermen sang a plaintive hymn, followed by a lovely waltz led by accordion. Another reason to applaud is that Pablo Neruda is played by LA Opera’s own inimitable Plácido Domingo. Although now 69 years old, his voice is still a magnificent thing to experience and he was right on for this role.  Praise be that his contract was just renewed until 2013. Also outstanding are tenor Charles Castronovo as Mario and Amanda Squitieri as Beatrice.

For LA Opera, Il Postino was undoubtedly an attractive proposition from the outset. A work already honored by Hollywood — check; appeal to local Hispanic audiences — check; local composer writing for local maestro — check; world premiere bragging rights — checkmate! Yet the opera itself feels as though it is not quite living up to its potential. A bit of dial-twisting on sets, direction, and story and this Il Postino could be worth writing home about.