LA Opera’s ‘The Barber of Seville’ 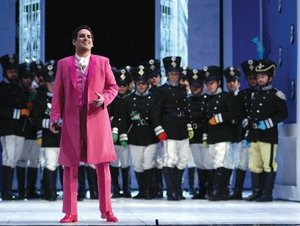 “Il Barbiere di Siviglia” is undoubtedly the most popular comic opera of all time.  Gioachino Rossini’s 1816 Bel Canto-style opera buffa was the first Italian opera ever performed in America (in New York in 1825) and made its composer into a household name worldwide. When a production gets it right, as LA Opera’s version has, it is one of the joys of the operatic experience — a spectacle that will enchant seasoned operagoers, novices and children alike.

Based on Beaumarchais’ 1773 play of the same name, “The Barber of Seville” is filled with stock characters recognizable from the commedia dell’arte tradition. The count, the doctor, the servant, the captain — all are nearly identical to the characters seen in September’s production, “The Elixir of Love.” Figaro himself is based on a commedia character called Brighella, known for his scheming, masterful lying and effusive character. This particular production originates from the Teatro Real in Madrid, and this is its first showing in the United States. It stands apart from other productions with its compelling visual style — cinematic enough that it was made into a DVD in 2005 (available from Decca; interestingly, two of the lead singers on the DVD, Juan Diego Florez and Bruno Praticó, are performing in this production).

As the opera opens, townsfolk move the building facades into place. The setting is early 19th-century Spain. Everything, including the sets and costumes, is white with tones of gray and black. Bright, cold lighting accentuates this feeling of sterility, symbolizing the colorless life that the heroine Rosina must endure sequestered as the ward of the dimwitted Doctor Bartolo. Figaro, the barber, agrees to help his friend Count Almaviva gain access to his beloved Rosina, which is accomplished via a series of disguises the count assumes. Need I add that hilarity ensues? In the second act, as happiness for the two lovers becomes more and more assured, color is gradually introduced — first only on the gloves of the soldiers, then on the crimson and fuchsia costumes of Figaro, Rosina and Almaviva. By the finale, the entire cast and set is awash in a dazzling array of the brightest colors, symbolizing the lovers’ passion and newfound outlook on life.

Because there is an alternating cast for this production, I can only comment on the singers I saw, who may not be the same as those singing on other nights. However, I would steer those planning to attend to these singers for several reasons: Juan Diego Florez as Count Almaviva comes from the original Spanish cast, as does Bruno Praticó as Doctor Bartolo. Both have a sure grip of the comic potential of this material and perform effortlessly to entertain us. Florez, a handsome Peruvian known to his many female admirers as JDF, has a light ‘n’ bright sound to his voice, quite a change from the big Italian tenors like Pavarotti or Domingo. Praticó’s prodigious rotundity and utter cluelessness make him really fun to watch. Joyce DiDonato as Rosina is pretty much today’s gold standard for this role. She played Rosina at the Metropolitan Opera in New York last month and at the Royal Opera in London in July (where she famously fell and broke her fibula, completing the run with crutch and wheelchair!). While still not ready perhaps to join the dancing Sevillans, her mezzo-soprano voice remains in fine form and it is a pleasure to hear her fancy coloratura. Nathan Gunn as Figaro and Andrea Silvestrelli as Don Basilio also merit special mention for their impressive baritone work.

In all, this is a very well balanced cast that knows how to play for laughs and offers more than creditable singing. If you go, take someone who has never been to an opera before; it’s almost guaranteed you will create a new fan.

“The Barber of Seville” plays at the Dorothy Chandler Pavilion through Dec. 19.