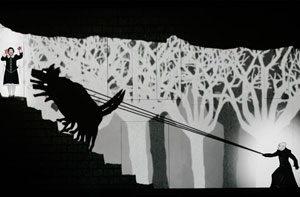 LA Opera has revived its 2013 production of “The Magic Flute,” which thrilled audiences and critics alike with its “intoxicating potpourri of film, animation and traditional opera,” as Culture Spot’s David Maurer wrote a little over two years ago.

Though directors Barrie Kosky (of Berlin’s Komische Oper) and Suzanne Andrade (of the British theater company 1927) looked back to the 1920s silent film era for inspiration, they created something entirely innovative and sure to influence the future of opera. Maurer described this “Flute” as “a beacon, leading the way forward to a new age and a new audience.” [Read Maurer’s entire review here: http://culturespotla.com/2013/12/review-the-magic-flute-at-la-opera/.]

It’s still one of the most imaginative productions out there. In fact, it’s such a fresh take on Mozart’s opera that the action might seem barely recognizable to those more familiar with Peter Hall’s 1993 production with sets and costumes by Gerald Scarfe (which LA Opera revived in 2009). As my guest said leaving the Dorothy Chandler Pavilion on Feb. 24, “That was like nothing I’ve seen before.”

Everything about this “Flute” is magical, but two characters in particular transport this story to an unexpected realm: the Queen of the Night, a giant skeleton/spider, and Monostatos, a Nosferatu-like vampire. So Young Park dazzled the audience with her powerful voice in the Queen of the Night’s famously demanding arias. Brenton Ryan’s vampire, holding back animated snarling dogs, could elicit shivers and then make us laugh in “Alles fühlt der Liebe Freuden” (All feel the joys of love).

All of the singers had to be on their toes, not only singing and acting on cue, but keeping pace with the animation, hand drawn by Paul Barritt, that provided the only “set.” They did so flawlessly, which is all the more impressive considering the cast showcased a number of young performers from the Domingo-Colburn-Stein Young Artist Program, including Young Park and alumnus Ben Bliss, who was wonderful as Tamino.

It was a brilliant choice to bring this “Flute” back so soon, and in celebration of LA Opera’s 30th anniversary. When a work of art has such a powerful effect on audiences, breathing new life into a creation that is 225 years old and mounted frequently by opera companies large and small worldwide, by all means, give more people the chance to see it. Wednesday night’s show packed the house, so hurry to get tickets for the remaining three shows.