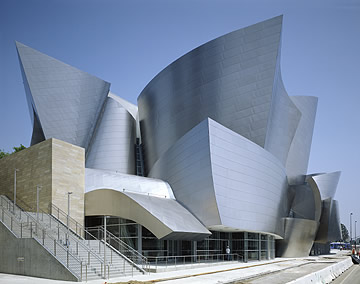 The 2009-2010 season of the Los Angeles Philharmonic begins with a big bang when new music director Gustavo Dudamel conducts the orchestra in a free concert, “Bienvenido Gustavo!,” at the Hollywood Bowl on Saturday, Oct. 3. But Gustavo will conduct several other concerts this upcoming season at Disney Hall. And the LA Phil continues its tradition of bringing in exciting guest conductors and world renowned guest orchestras.

Dudamel’s inaugural concert with the LA Phil at Disney Hall will be Thursday, Oct. 8, at 8 p.m. when he will conduct two pieces: “City Noir,” by John Adams, a piece commissioned by the LA Phil, and Gustav Mahler’s Symphony No. 1 in D major, “The Titan.” He will follow that on Friday and Saturday at 8 p.m. and Sunday at 2 p.m. with concerts featuring the Mahler and “Su” by Korean composer Unsuk Chin, a piece also commissioned by the LA Phil.

The pieces by contemporary composers Adams and Chin hint at Dudamel’s programming during the upcoming year when he will conduct contemporary music on every concert, devoting a few concerts exclusively to new music, including the West Coast, Left Coast series in November and December, with Leonard Slatkin and John Adams lending their conducting prowess in two of the concerts. It remains to be seen whether Dudamel can capitalize on his valuable currency as the wunderkind of the classical music world and attract sell-out crowds to these concerts. Certainly he should be able to keep audiences coming to concerts with better-known contemporary music, such as those scheduled on Nov. 12-15 (with two works by Luciano Berio), and Nov. 19-22 (with the violin concerto by Alban Berg), when he will also perform warhorses including Franz Schubert’s Symphony No. 8 in B minor, “Unfinished,” and two Mozart symphonies, No. 38 (“Prague”) and No. 41 (“Jupiter”), respectively.

In addition to Dudamel’s concerts, the LA Phil will bring in a host of guest conductors, some of whom are relatively unknown, at least in the United States, such as Russian conductor, Andrey Boreyko, who will conduct selections from “Sleeping Beauty” by Tchaikovsky, Stravinsky’s “Divertimento” from “La Baiser de la Fée” (The Fairy’s Kiss), and Ravel’s “La Valse” on Oct. 23-25. But, don’t worry, other, more familiar crowd pleasers, such as Christoph Eschenbach and Zubin Mehta will return to Los Angeles, conducting concerts with music by Dvorák (Symphony No. 9 in E minor, “From the New World”) and Beethoven (Symphony No. 3 in E flat major, “Eroica”), respectively.

Other world-class orchestras will also visit Disney Hall. In particular, during Thanksgiving week, the Berlin Philharmonic led by Sir Simon Rattle, will perform two concerts, including the Piano Quartet in G minor, orchestrated by Arnold Schoenberg, and Brahm’s Symphony No. 1 in C minor on Monday, Nov. 23, and Wagner’s “Die Meistersinger Overture,” Schoenberg’s Chamber Symphony No. 1, and Brahms’ Symphony No. 2 in D major on Tuesday, Nov. 24. If you are a classical music fan, that’s certainly an event for which to give thanks. Disney Hall will also host the Philharmonia Baroque Orchestra conducted by Nicholas McGegan on Wednesday, Nov. 11.

The LA Phil will also present a variety of other concerts, including John Williams conducting an evening of Music From the City of Angels on Oct. 16-18, the Los Angeles Master Chorale performing works by Adams and Mozart on Oct. 18, Dudamel leading the LA Phil and the Master Chorale in Verdi’s “Requiem” on Nov. 5-8, the annual performances of Handel’s “Messiah” on Dec. 15-16; and Vivaldi’s “Four Seasons” on Dec. 18-20.

But that’s not all folks. There is a lot more. Visit the Calendar page of the LA Phil’s website at http://www.laphil.com/tickets/calendar-fullseason.cfm.