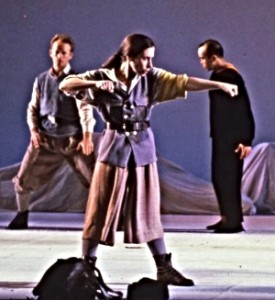 The innovative and internationally awarded director is joining forces with an ensemble of 19 artists, including several members of the original 1991 production as well as from the 1993 recording of the music. Local choreographer Danielle Agami of Ate 9 Dance Company is part of this creative team.

Conducted by Paolo Bortolameolli and performed by the LA Phil New Music Group, the story follows a girl/woman/elder’s imaginative quest-journey into her inner space. Inspired by the life of explorer Alexandra David-Néel, the traveler discovers truths about herself and the world around her. Highlighting this aural/visual pilgrimage is a large sphere designed by Es Devlin that serves as both a projection screen and a location within which the performers interact.

Sharon is the founder and artistic director of The Industry, an artist-driven experimental opera production company based right here in Los Angeles. He has previously brought the traditional operatic genre into unconventional environments, such as train stations, Hollywood sound stages, moving vehicles, warehouses, parking lots and escalator corridors. Labeled by The New York Times as “opera’s disrupter in residence,” his mission is to expand the musical form.