The 2011-2012 season of the LA Philharmonic continues on Thursday, Jan. 5, with the first of four concerts featuring pianist Jean-Yves Thibaudet performing the Lizst Piano Concerto No. 2 in honor of the anniversary of the composer’s 200th birthday. Also on the program are the Hussite Overture by Dvorák and the Saint-Saëns Symphony No. 3, “The Organ.” If you haven’t heard the organ in Disney Hall yet, this is a golden opportunity. 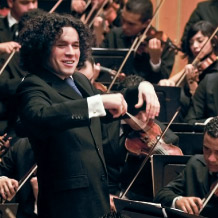 As you may know, the LA Phil’s music director, Gustavo Dudamel, is performing all of the symphonies of Gustav Mahler in The Mahler Project between Jan. 13 and Feb. 5. With a few exceptions (e.g., Europa Galante performing on Wednesday, Jan. 25; Joshua Bell in recital on Tuesday, Feb. 7; and Leif Ove Andsnes in recital on Wednesday, Feb. 8), for almost one month, Disney Hall will only hear the sounds of Mahler. In this Herculean undertaking, Dudamel will conduct both the LA Phil and his hometown orchestra, the Simón Bolívar Symphony Orchestra of Venezuela, in both LA and Caracas.

The project begins on Friday, Jan. 13, with three concerts featuring Mahler’s pastoral Symphony No. 4. Also on the program is Mahler’s “Songs of a Wayfarer” with baritone Thomas Hampson.

The Project continues on Thursday, Jan. 19, for three concerts featuring the Symphony No. 1 in D major (“Titan”) and the Adagio from Mahler’s unfinished Symphony No. 10.

Following the Mahler extravaganza, Dudamel takes a break, at least from LA, and the LA Phil finishes out February beginning on Thursday, Feb. 23, with three concerts featuring guest conductor Charles Dutoit leading the LA Phil in works by Stravinsky (“Symphonies of Wind Instruments”), Debussy (“La Mer”), and Prokofiev (Suite from “Romeo and Juliet”).

Three interesting concerts are scheduled on March 15, 17, and 18. As the LA Phil website states: “A large contingent of the world’s greatest cellists will converge at USC to celebrate the Gregor Piatigorsky International Cello Festival. As part of this celebration, the LA Phil will present several special events, including a weekend of concerts in which each performance will feature a different piece with a different cello soloist.”

The three concerts feature the Estonian conductor, Neeme Järvi, with three distinguished cellists – Ralph Kirshbaum, Mischa Maisky, and Alisa Wellerstein – performing three great works for the cello – the Cello Concerto by Dvorák, the Shostakovich Cello Concerto No. 1, and the Tchaikovsky Rococo Variations. Also on each of the programs is the Carnival Overture by Dvorák and the Symphony No. 5 by Shostakovich. The last concert on Sunday, March 18, at 2 p.m. will be followed that evening by a cello recital featuring these three cellists plus five more.

Andre Watts joins the LA Phil in the Grieg Piano Concerto in A minor in three concerts beginning on Friday, March 30. Also on the program are Bartók’s Miraculous Mandarin Suite, and Respighi’s “Three Botticelli Pictures” or “Botticelli Triptych.”

Herbert Blomstedt returns to Disney Hall to conduct the LA Phil in three performances of Beethoven’s “Missa Solemnis” beginning on Friday, April 13. Then on Monday, April 16, and Wednesday, April 18, a series titled Sublime Schubert commences, featuring Christoph Eschenbach accompanying baritone Matthias Goerne in two recitals of Schubert song cycles, and then concludes on Friday, Saturday, and Sunday for concerts with the LA Phil performing Schubert’s Symphony No. 9, “Great.”  Sandwiched in between is a performance on Tuesday, April 15, of the Schubert String Quartet in A minor and the famous Quintet by members of the LA Phil.

May starts off heavy on the third with four concerts featuring Sir Simon Rattle conducting the LA Phil in Bruckner’s Symphony No. 9. Also on the program are György Ligeti’s Atmosphères, Wagner’s Prelude to Act I of Lohengrin, and Mahler’s Rückert-Lieder.

The second major American orchestra to visit Disney Hall this season (the first was the Boston Symphony; see our review) is the New York Philharmonic who, under the direction of their recently appointed music director, Alan Gilbert, will perform a concert on Wednesday, May 9, featuring the Carnival Overture by Dvorák, the West Coast premiere of the Piano Concerto No. 3 by Magnus Lindberg, and the Fourth Symphony by Tchaikovsky.

After a long and much deserved hiatus from his Mahler Project (although he was surely not sitting idly), Gustavo Dudamel returns on Thursday, May 10, for two concerts featuring mostly Scandinavian music, including Grieg’s Peer Gynt Suite No. 1 and the Symphony No. 5 by Sibelius.

And then the very next day, Dudamel takes on the task of conducting three concert performances of Mozart’s “Don Giovanni” with baritone Mariusz Kwiecien. This is the first installment of the Mozart/da Ponte Trilogy, which Dudamel and the LA Phil will present over the next three years.

And, for lovers of Mozart’s chamber music, sandwiched in between two performances of “Don Giovanni” on Tuesday, May 22, is a performance by members of the LA Phil of Mozart’s Piano Quartet in G minor and two string quartets, in C major, K 465, and in D minor, K 421.

And without taking a breath, Dudamel squeezes in two more concerts on Thursday, May 25, and Sunday, May 27, of the Symphony No. 5 by Sibelius. On the program this time is Tchaikovsky’s Violin Concerto.

The 2011-2012 season concludes with four concerts beginning on Thursday, May 31, featuring Dudamel conducting the world premiere and LA Phil-commissioned “The Gospel According to the Other Mary” by John Adams.

For a complete list of events at Disney Hall, please go to http://www.laphil.com/tickets/calendar-fullseason.cfm.