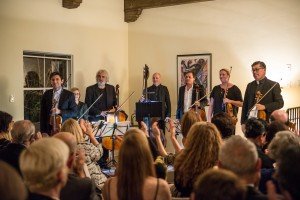 For a transcendent musical evening, don’t miss Los Angeles Chamber Orchestra’s final installment in its “LACO à la carte” series. Experience chamber music as it was meant to be heard when six LACO musicians perform music by Haydn, Mozart, Ernst Toch and Hanns Eisler in an intimate setting at the Brentwood residence of the Consul General of Austria at the “Austria à la carte” event on Friday, Nov. 7, at 7 p.m. Enjoy fine wine, cuisine and conversation at the reception before and dinner after the music.

I sampled the “Germany à la carte” event on Oct. 25 and was truly inspired by LACO’s performance of Richard Strauss’ “Metamorphosen,” a rarely performed masterpiece. The acoustics in the Hancock Park residence of Dr. Bernd Fischer, the Consul General of Germany, and Mrs. Jutta Fischer were phenomenal, and the sound was superb. The closeness of audience and performer was incredible — like a private concert in your living room.

LACO chose to perform the 25-minute “Metamorphosen” with an arrangement for septet composed by Strauss, though he later expanded it to a “Study for 23 Solo Strings.” Andrew Shulman, leader and principal cellist, introduced the music with an engaging talk about the piece and asked the other members of the septet — Carrie Kennedy (violin), Joel Pargman (violin), Roland Kato (principal viola), Victoria Miskolczy (associate principal viola), Trevor Handy (cello) and Geoffrey Osika (bass) — to play snippets of the themes, including the direct quote from Beethoven’s “Eroica” Symphony in the bass part late in the piece.

Shulman shared a very short poem by Göethe whose philosophical work might have influenced Strauss’ composition of “Metamorphosen.” Written during the final months of World War II, “Metamorphosen” may also be an expression of mourning about the destruction of Germany, especially its cultural treasures.

From the first note, we were pulled into the music, swept up in the septet’s unified, sublime sound and carried through the emotional range of “Metamorphosen.” LACO’s performance was at turns blissful and nearly heartbreaking, but always heavenly.

LACO indicated that the evening was programmed to commemorate the 25th anniversary of the fall of the Berlin Wall and to highlight music’s role in promoting freedom, unity and hope. The theme of the evening provided plenty of fodder for conversation amongst the music lovers, many of whom discussed travels to and experiences in Germany. The audience also had the chance to mingle with the performers.

There is definitely a special connection at “LACO à la carte.” What is more, these fundraising events support the artistic and education programming of the Los Angeles Chamber Orchestra. Even more reason to experience these exceptional performances.