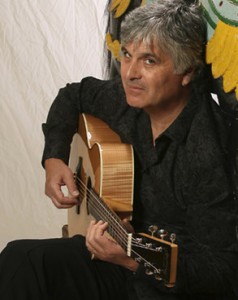 There won’t be an eardrum-shattering sound system, elaborate lighting, fireworks, or other over-the-top stadium concert hullabaloo. There won’t even be a band — just one guy playing the guitar. And he won’t be singing either. But Laurence Juber‘s solo acoustic show Friday, Nov. 6, at 8 p.m. at McCabe’s will still rock.

To get an idea of how incredible Juber is with six strings, watch him play Jimi Hendrix’s “Little Wing” on the acoustic guitar. Or consider what the San Francisco Chronicle had to say about his virtuosic playing: “He gloriously articulates the melodies and never succumbs to show-off playing. But the notes spin out of the songs with such finesse and musical agility, it’s hard to believe he has only 10 fingers and six strings.”

Juber was the lead guitarist for Paul McCartney’s Wings and spent three years touring and recording with the band before it dissolved in 1981. He has two Grammys and was voted No. 1 by Fingerstyle Guitar magazine. Plus, Martin makes a Laurence Juber signature guitar. In addition to composing and arranging music for TV and film, Juber has released 14 critically acclaimed solo albums. His latest CD, “Wooden Horses,” showcases his compositions for solo guitar. There are plenty of YouTube videos of his performances, including Beatles tunes he’s transcribed for solo guitar.

McCabe’s is the ultimate showcase for musicians of Juber’s caliber. The guitar shop, which opened in 1958, has been hosting concerts for 40 years, with a list of past performers including Joni Mitchell, Taj Mahal, Doc Watson, and Steve Earle. Performances take place in an intimate back room, and there is no bar, no “scene,” no distraction. It’s all about the music.

Juber will also perform at the Fret House in Covina on Nov. 14 and at SOhO in Santa Barbara on Nov. 18.