Laurence Juber’s Fingers Do the Talking 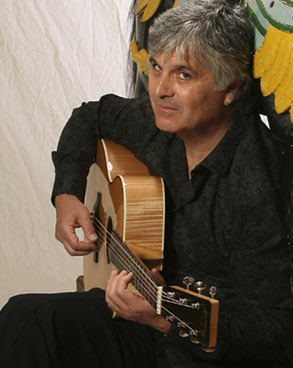 Former Wings lead guitarist and acoustic guitar player extraordinaire Laurence Juber dazzled listeners last night at McCabe’s Guitar Shop in Santa Monica before an almost-packed house. Juber played two of his special Martin signature model guitars, one made of Madagascar rosewood (hopefully sustainably harvested) and the other of maple, using a variety of tunings that he announced – along with the make and gauge of strings, the pickup and the preamp that he uses – to the fellow guitarists in the audience, although too fast for this guitarist to remember. The Martin guitars with his pickup and preamp and the great sound system (and engineer) at McCabe’s contributed to an outstanding evening of virtuoso guitar playing.

Juber’s method of fingerstyle playing (he only performed one song with a flat pick) is unique, and he performs a variety of musical styles from jazz to blues to rock, and even songs from musicals, which he and his wife write and produce. He also got a lot of neat sounds by slapping the strings, playing harmonics with his right hand while the left hand held the chords or notes, and hitting the strings with the left hand alone, among other tricks.

Amazingly, Juber plays the steel string guitar as if it had nylon strings, without using finger picks or even, from this observer’s vantage point, his fingernails. He often uses his thumb in ways reminiscent of the late great Wes Montgomery. It’s hard to imagine that he could get such rich and clear sounds from his fingers alone, but he does.

In addition to his own songs, Juber played his arrangements of a number of Beatles songs, including “I Saw Her Standing There,” “Rain,” “Strawberry Fields Forever” (my favorite), and McCartney’s “Maybe I’m Amazed.” He also performed arrangements of some “old English folk songs” – Eric Clapton’s “Layla” and “Every Breath You Take” by the Police – as well as his rendition of the Pink Panther theme, which he recorded for the Grammy-winning album “Henry Mancini-Pink Guitar.” His first encore piece was a beautifully rendered arrangement of Hendrix’s “Little Wing.”

Juber doesn’t just interpret others’ songs; he remains true to the recorded version by incorporating as much of the song’s original production as possible in his arrangements. For example, in “Strawberry Fields Forever” he almost perfectly reproduced the swarmandel used as a transition a couple of times between chorus and verse in the original. And in “Layla,” he reproduced the piano part that comprises the second half of the song.

When Juber first entered the stage, he played two songs without even saying a word to the audience. And when he finally swung the vocal microphone around to talk, the woman behind me exclaimed, “He talks!” But his repartee with the audience, while appreciated by most audience members, was frankly a little staid and peppered with corny jokes (like saying the carpool lane of the 405 brought on “carpool funnel syndrome” and dredging up the old “baroque” joke).

But Juber didn’t need to talk. He let his fingers do the talking – and they spoke loudly and clearly, proclaiming him one of the best around.

Juber next performs at the Fret House in Covina on Nov. 14 and at SOhO in Santa Barbara on Nov. 18. He’ll be at the Coffee Gallery Backstage in Altadena on Feb. 5, 2010.