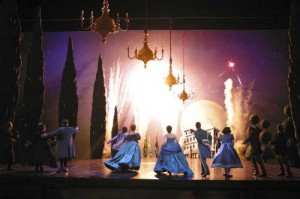 I once took a friend who had never seen an opera before to a performance of Lohengrin, which was presented in a fashionably minimalist way. With its epic length, long recitatives and not much to look at, the opera made a less than favorable impression on her. As far as I know, she has never been back to see another opera. I should have taken her to see LA Opera’s revival of Le Nozze de Figaro; no doubt I would have made a convert for life. For here is Mozart at the height of his genius; add to that a heap of silly antics, lavish costumery and eye-popping sets and you have a recipe for pure pleasure, and that is just what LA Opera delivers.

The fully translated title of the opera is The Marriage of Figaro, or The Crazy Day. It is the second in a trilogy of plays by Beaumarchais that were wildly popular in pre-Revolutionary France for mocking the foibles of the aristocracy. Beaumarchais’ first play in the set, The Barber of Seville, is best known today from the popular Rossini opera of 1816 (the last, The Guilty Mother, is much less known).  The Crazy Day in question takes place some years after Count Almaviva has married his heartthrob Rosina, whom he pursued so ardently in The Barber of Seville. But now his ardor seems to have cooled and his wandering eye has fixed on Susanna, his wife’s maid. It is Susanna’s wedding day and the count is determined to invoke his droit de seigneur by bedding her before her nuptials to Figaro. Inevitable and hilarious complications ensue until the end when all is set right.

In writing this opera, Mozart translated the words of the play to Italian, toned down the political rhetoric and created an opera buffa, an 18th-century development that highlights comic situations, usually involving servants speaking common dialects. He chose as his writing partner Lorenzo da Ponte, court librettist to Emperor Joseph II, who was a character in his own right, having been a priest and brothel operator in Italy until he was run out of town. Together, the two fashioned a work that many agree is the most perfect opera ever written with nary a false note.

With this production, and the direction of Ian Judge, the opera is buffed up to a brilliant gleam. It opens with Figaro painting the black walls of a stately salon red. It is an apt metaphor for what is about to unfold, especially the spectacle of unloosed passions running rampant. The other sets are just as luscious with a bedroom done in gold leaf, an office in bright green and black, and a patio with a vivid blue background. The visual clues that place us in time are mixed up, with the men wearing the typical 18th-century breeches, blouses and buckles, while the women wear outfits reminiscent of the New Look that Christian Dior introduced in 1947. Other mid-20th-century details include Hollywood Regency style furnishings, antique telephones and a vintage copy of Vogue on a nightstand. The net effect is something a bit removed in time, but not very far. It is effective in everything except a strange ensemble dance scene that combines ’40s swing moves with flamenco. Dancing With the Stars judges would have voted this one off.

The theme of simmering sexuality is kicked up a notch with characters doing a bit of groping and rolling around with each other. In this sense, the fireworks at the end (how did they get the fire marshal to sign off on this?) represent a stupendous climax in more ways than one.

The cast is very good, with particular kudos going to Daniel Okulitch as Figaro and Martina Serafin as Countess Almaviva, who displayed a very strong, yet controlled and tender voice. Mezzo-soprano Renata Pokupić as the teenage page Cherubino sang well and had a spunky presence, but was unable to disguise her femininity in a role seemingly tailor made for a castrato to sing. Interestingly, Mozart did originally cast a female to play this gender-bending role and not a castrato — although they were certainly available at the time — in its Vienna debut in 1786.

Another plus for this production is that the orchestra is conducted by Plácido Domingo, LA Opera’s own general director and go-to tenor. Is there anything this man can’t do? He coaxed lively tempi from the musicians, and it was fun watching his animated conducting style.

So round up your non-opera-going friends and take them to this production. They will thank you for a lovely, entertaining evening and perhaps will also be tempted to dip their toe in again for some of the more challenging fare to come this season.