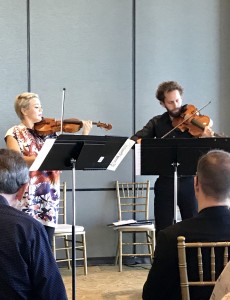 Le Salon de Musiques kicked off their eighth season of intimate chamber music on the fifth floor of the Dorothy Chandler Pavilion in Los Angeles on Oct. 15 with a program titled “Romantic Splendors,” featuring the String Quartet No. 4 in C minor, Op. 18 by Beethoven, the Duo for Violin and Viola in E minor, Op. 13 by Louis Spohr, and the String Quartet No. 14 in D minor, D. 810, “Death and the Maiden,” by Schubert.

The title could have been “Later Classical Splendors” or “Early Romantic Splendors,” as the music was all composed toward the end of the classical period and the beginning of the Romantic era. The early Beethoven quartet has hints of Romanticism, but it still largely classical in structure, whereas the Schubert, with its “Death and the Maiden” motif, is more clearly in the Romantic style.

The performers on Sunday were violinists Ambroise Aubrun and Serena McKinney, violist Ben Ullery, and cellist Yoshika Masuda, all playing on centuries-old (from 1721 to the mid-1800s) European instruments.

In between was the Spohr, a delightful and, according to Ullery, very difficult piece, which really showcased both McKinney’s and Ullery’s strong playing. Founder and Artistic Director François Chouchan presents this concert series to showcase not only works of the most renowned composers but also pieces by lesser-known composers that may be called the buried treasures of European musical culture. The audience agreed it was a pleasure to be introduced to Spohr — a German composer and violinist who was highly regarded in his lifetime and invented the violin chinrest.

The Schubert, however, was the crowning achievement not only of the composer, but also of these performers. With McKinney’s lead, they attacked the piece with abandon, especially in the final Presto movement, which, as Musicologist and Professor at the Colburn Conservatory of Music Kristi Brown-Montesano indicated, was more like a danse macabre. The slow movement in which Schubert quotes from his song, “Death and the Maiden,” is a masterpiece in and of itself, and the performers brought out all of its majesty.

Le Salon de Musiques is a unique event in Los Angeles, a feast for the senses where you can hear beautiful chamber music in an intimate setting (the way it was meant to be heard) and then talk with the performers while enjoying French Champagne and a gourmet high tea buffet.

The next concerts will be…

For tickets, more information and a list of all of the season’s concerts, visit http://lesalondemusiques.com/concerts-schedule-dorothy-chandler-pavilion.asp.