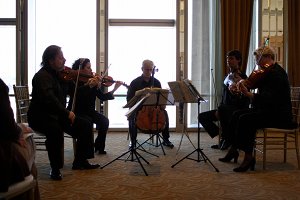 Did you ever wonder what it might have been like to be present at one of the salons where Schubert or Chopin performed in an intimate setting for a few friends and family?

Well, with Le Salon de Musiques, which concludes its first season on May 15 at 4 p.m., you have the opportunity for just such an experience. The chamber music series takes place on the fifth floor of the Dorothy Chandler Pavilion with a view over the Taper and Ahmanson toward the mountains.

On a beautiful Sunday afternoon on April 10, a group of first-rate musicians performed two works, the one-movement String Trio in B flat major D 581 by Franz Schubert and the exquisite String Quintet in G minor k 516 by Mozart.

And then with only enough time to bring over two more chairs for second violinist Julie Gigante and violist Victoria Miskolczy, the musicians performed the Mozart quintet.

The Schubert was performed with the required grace, and the Mozart, one of his many masterworks, was given an emotionally wrenching performance.

This is absolutely the venue to hear chamber music, especially with the caliber of musician represented. Because audience members sit literally feet from the musicians, the music seems more alive than listening to it performed in a concert hall. Moreover, even the muted strings in the third movement (Adagio ma non troppo) of the Mozart could be heard clearly. And there’s something about being able to hear the musicians breathe on the upbeat and to hear the sound of the bows on the strings that makes the music seem more vibrant.

After the first-rate performances, the audience was treated to champagne during La Conversation. The audience had the opportunity to ask questions of the musicians and of Dr. Adams about both the performance and the music.

Following that, audience members were treated to a light meal catered by Patina during which they could further discuss the music and other topics.

All in all, this is an event that any chamber music lover would relish.

The next and final concert of the series for this season features two two-piano works by Mozart and Rachmaninoff on May 15.