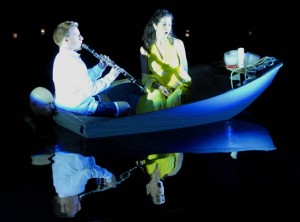 Opera in a swimming pool? Somehow this 80-minute piece, performed without intermission, was perfectly suited to the venue. The audience was seated in (rather uncomfortable) bleachers at the shallow pool. The bleachers across the pool and opposite the audience were draped in white fabric with strategically placed Grecian-style statues. Even though the song cycle was in English, super titles were projected on a sheet of draped fabric. On the walls near the ceiling, photographs of the two lovers were effectively projected at times during the drama to facilitate the storytelling.

The cycle starred coloratura soprano Elizabeth Futral as both Euridice and the narrator of the mythical tale. The composer cleverly conceived the part of Orpheus for clarinetist Todd Palmer. The piece opened with an evocative theme on the clarinet, which Palmer played while gently steered around the pool. As Futral sang the poignant narrative, doubles of the two characters re-enacted the story, sometimes accompanying them in the boat, sometimes swimming expressively in the pool, sometimes outside the pool. The acoustics (once the troubles with Futral’s body mike were solved), the play of the reflected light, the background noise of flowing water, all combined to create a mesmerizing ambiance.

Long Beach Opera’s realization of Gordon’s Orpheus & Euridice closed the 2009-10 season with one of its most satisfying and successful artistic achievements.

For information about Long Beach Opera’s 2011 season, visit their website at www.longbeachopera.org. The company will mount four operas January through June.