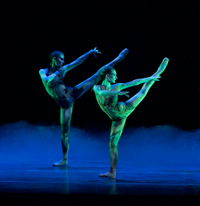 A few weeks ago, as I sat in Walt Disney Concert Hall for a concert by the New York Philharmonic, I mused to my companion that – in our 60s – we were some of the youngest people there. That isn’t news. But this is: the much-lamented “graying” of the audience for classical music, opera and dance seems to have missed Los Angeles Ballet.

I looked around the lobby of Santa Monica’s Broad Stage as the audience assembled for the final performance of LAB’s “NextWaveLA,” a program of four – count ’em, four – world premieres by some of the brightest lights in contemporary dance.  The presence of a few other silver-haired old dames kept me from feeling completely out of place among a vociferous throng largely composed of teens and 20-somethings, madly twittering on smartphones.

“NextWaveLA” opened with McNamee’s “Colony,” to music of Anna Clyne. This mesmerizing work utilizes traditional elements of classical ballet in surprisingly unique combinations. A large, synchronous group moves in disciplined lines and circles, giving way to a quasi-traditional pas de deux… singly or in pairs or trios, characters conform to the group or risk ostracism. Six-year LAB veteran Kelly Ann Sloan offers a fiercely dramatic performance reminiscent of her brilliant work in LAB’s third-season “The Evangelist.” Woven through and beyond McNamee’s piece is a melancholy statement about the danger of individuality. Conformity may confine and chafe, but, in dancing to the beat of a different drummer, one risks a lonely life outside the safety of the circle. Kudos to McNamee. It takes courage to swim against the tide.

“Duets in the act of —” is Tayeh’s third world premiere for LAB. Arguably one of the most innovative of contemporary choreographers, Tayeh uses her highly personal dance vocabulary to illustrate subtle layers of desire, action and memory as four couples explore the universal conflicts of love partnerships, to music of Olafur Arnalds. One gradually senses that each couple represents but one aspect of a single relationship. Company principal ballerina Allyssa Bross contorts in “the act of cold desperation,” struggling to hold on to an indifferent and increasingly repelled lover, danced by Zheng Hua Li. This duet morphs into “the act of artificial seduction,” as Julia Cinquemani manipulates Vincent Adams with an elastic sensuality. The parting lovers – now represented by Molly Flippen and Nicolas de la Vega – briefly remember the good times in an “act of fleeting nostalgia,” before “the act of false ego,” danced by Kate Highstrete (alternating with company principal Allynne Noelle) and Alexander Castillo, ultimately destroys any chance of reconciliation. Tayeh brings all four couples together in a blazing finale suggestive of her groundbreaking work on the hit TV show, “So You Think You Can Dance.”

After an intermission, the curtain opens on “Sirens,” from last year’s LAB choreographic workshop, by returning choreographer Walsh. Formerly an international ballerina, Walsh borrows from the 150-year tradition of the great supernatural Romantic ballets, in which female nature-spirits captivate and charm unsuspecting young men. A master of the narrative story ballet, she imbues every smallest gesture with meaning as she creates a watery matrix where nine Sirens seduce five hapless mariners onto the rocks. This is a highly complex work, and Walsh’s dancers are to be congratulated for superb ensemble work. The women’s corps de ballet exhibit their acclaimed precision and unity throughout; and the men’s ensemble, led by Nicolas de la Vega, is uniformly excellent. Composer Paul Rivera Jr. contributes crashing waves, Siren songs, creaking ship’s timbers and other sound effects woven through a driving, custom-designed rock score.

The program ends with Tookey’s “Be Still,” to music of Matthew Banks and Johann Johannsson. Emmy-nominated for her work on “So You Think You Can Dance,” Tookey has synthesized a sui generis style incorporating ballet, jazz and contemporary dance. Largely abstract, her first work for LAB explores the human interaction with Time as both element and concept. “We are always faced with the inevitability of Time running out,” she says in the program notes. “We crave that perfect moment when we’re completely present and time stands still.” Her dancers appear trapped in the inexorable ticking of the clock; legs seem to describe the eternal pendulum; Ben Pilat’s lighting contracts, compressing and squeezing the dancers as the hourglass runs out. Bross, Li and Flippen sustain the dramatic tension of balancing on the razor’s edge of this extraordinary work of art.

Highly effective original costumes for all four pieces are by LAB resident designer Kanique Thomas. Pilat’s sensational lighting design emerges as a character in each dance.