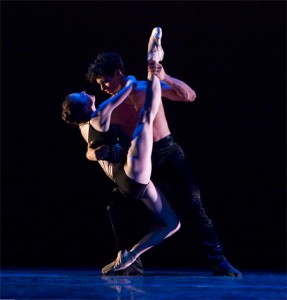 The human mind arrives at stunning truths which, once known, cannot be unknown. The most life-altering of all insights – the inescapable reality of Death – comes to all of us at some point. The force of the blow that precipitates our dark understanding, and our age when it comes, color forever how we approach the rest of our lives. Some bury their knowledge under pleasant distractions; some hide the dark shadow in drugs and alcohol; some wait, in fear and suffering, for Death’s inexorable approach. And some sublimate that suffering into Art.

Tayeh’s horrifically tragic early childhood and subsequent PTSD led to decades in constant, crippling fear of death.  A shockingly personal work, “My Greatest Fear” elevates her journey from inarticulate grief to eloquent expression. For a preview, go to http://www.losangelesballet.org/html/news_video1.htm.

The performance features remarkable commitment and synergy among Tayeh’s 12 dancers, who collaborated on the piece through a development process which included sharing personal stories of loss and photographs of deceased loved ones. Tayeh’s rehearsals incorporated guided meditations to bring her dancers into deep contact with their own experiences of grief.  She admits, “It was a risk. I didn’t know if they could – or would – go there with me.”

“Go there,” they do. In performance, the dancers achieve a level of emotional intensity and an intimacy rarely seen in the theater. Grace McLoughlin and Chehon Wespi-Tschopp are heartbreakingly tender with each other throughout an extended pas de deux full of complex combinations and gorgeous lifts. For all their technical virtuosity, it is this emotional depth that sets them apart. Tyler Burkett’s solo tour de force of leaps, turns, and acrobatic floor work is dramatically motivated and completely organic. Large and powerful Nicholas De La Vega exhibits striking vulnerability, dancing with total conviction and brimming eyes.

Chelsea Paige Johnston, who suffered broken ribs during a rehearsal, leaves the stage with tears streaming down her cheeks after the opening tableau. “An injury lets us know how fragile we really are. Unable to dance, I felt the total loss of my identity,” she says. “But, rather than replacing me, Sonya altered the choreography to let me still be a part of it.”  Completely cohesive, later in the piece the other dancers react to Johnston’s absence as to a wound, to the severing of a limb.

A master of composition, Tayeh uses not only a unique movement vocabulary, but stillness as well in her shattering confrontation with death. In the end, the dancers find not acceptance, but surrender. Tayeh’s moving tone poem to music of Max Richter and Arvo Pärt is underscored beautifully through Kanique Thomas’ dramatic costumes and Ben Pilat’s imaginative and evocative lighting. Judging from the extended ovation for Tayeh and her dancers and the furtive repairs to streaked mascara in the ladies’ room at intermission, many in the audience were as moved as I was.

Opening the CELEBRATION program was the ”Raymonda Variations,” Balanchine’s 1961 tribute to the 1898 ballet choreographed by Marius Petipa to music by Glazunov. Balanchine’s characteristically narrative-free distillation provides a lush showcase for a principal couple and five soloists from the women’s corps de ballet.

A Fragonard painting come to life, the lovely opening tableau – featuring fluffy pink tutus from the original Karinska designs, on loan from Pennsylvania Ballet – drew appreciative applause. Principals Monica Pelfrey and Christopher Revels delivered the goods with energy and refinement. Pelfrey’s graciousness and warmth, no less than her perfect balance and lovely ports des bras, announce her as an ascending star. All of 19 years old, Revels is a major find, conquering the ballet’s technical and partnering demands with ease. Bravura solo performances from McLoughlin, Isabel Vondermuhll, Julia Cinquemani, Kelly Ann Sloan, and Kate Highstrete in the variations, and the celebrated perfection of LAB’s women’s corps, reinforce the company’s growing national reputation.

Balanchine’s 1954 “Western Symphony,” set to Hershy Kay’s honky-tonk saloon-piano and country fiddles arrangements of traditional American folk tunes, provides the evening’s boisterous finale. Costumes – again by Karinska – and scenery are courtesy of San Francisco Ballet. The women are tarted up in pink, blue, red, or green bustiers with multi-colored tutus; the men are duded up in black western shirts and Stetsons, against a Wild West street scene backdrop.

Everything about this piece works.  One minute, amorous couples dance a soft prairie waltz; and the next, four dudes are kickin’ up the dust with bounding double tours en l’air. The choreography permits the dancers to add personal touches of comic characterization to their roles. LAB’s resident dramatic ballerina, having scorched the scenery in “The Evangelist” and “Prodigal Son” in past seasons, Melissa Barak is brilliantly deadpan and scintillatingly saucy in the Allegro. She blazes through the intricate footwork with a devil-may-care panache. Alexander Castillo, who partnered the Arabian Dance in his company debut in December, partners Barak effectively, especially in his effortless lifts. His long limbs and clean technique are a pleasure to watch.

In the Adagio second movement, vixen Pelfrey lures elegant rhinestone cowboy Zheng Hua Li away from four other females. All liquid arms and beautiful extensions, she toys with his affections, and then moseys on. Li gets the evening’s biggest laugh – with a simple shrug, as he returns to his four ladies.  Lovely Alyssa Bross is a witty saloon floozy in the Rondo third movement, partnered by Revels with tireless bounce and joie de vivre. Revels plays a charming “Aw, shucks!” ingenuousness, while soaring through a succession of unbelievably high jumps.

McLoughlin and Burkett joined the other principals in the hoedown of a finale. Their brief appearance is a reminder that, though at first the dance was in four movements – each led by a principal couple – Balanchine cut the Scherzo in 1960. All that remains for its leading couple is their appearance in the last roundup. The curtain comes down on the entire company, in a swirl of pirouettes in colorful rows.