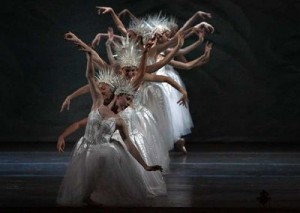 When Lev Ivanov first choreographed “The Nutcracker” in 1892, the parameters of classical ballet decided a great deal for him.  A gesture system, theatrical conventions, and the arrangement of the grand pas de deux came from tradition and from his mentor, Marius Petipa.  Even the story, based on E.T.A. Hoffman’s, was something Petipa commissioned to composer Peter Tchaikovsky.  Ivanov’s romantic vision and idyllic approach merely softened the edges of an otherwise strictly period ballet.

In its “Nutcracker,” Los Angeles Ballet does away with parameters altogether.  The story is moved to 1912 Los Angeles.  Thordal Christensen and Colleen Neary, co-artistic directors, slide, swing, and invert bodies in a stunning choreography of neo-classical style, ballet technique, and sunny visual pop.  The costumes and sets are vibrant and bold, and even Uncle Drosselmeyer appears as a local: the traditionally older, often foreboding character is here a young, flamboyant man with fur coats and a happy mischievousness.

In the first act, where Clara receives her strange Nutcracker doll, the Staulbaums are throwing their usual Christmas party.  The guests and their exuberant children introduce Mikael Melbye’s first thoughtful costumes: period dress and rich, wintry colors, complementing the dance and the scene.  But in the production’s only failure, the ballroom on stage is disorganized at best.  A reveling musical score is undermined by an unenthusiastic party that neither characterizes the adults nor shows off their social footwork.

When Andrew Brader’s Drosselmeyer appears, bringing gifts and live dolls, his magic finally unites the partygoers’ (and the audience’s) attentions.  Visiting artist Sergey Kheylik defies gravity as the Cossack Doll.  Los Angeles Ballet newcomer Katrina Gould practically beams: her Columbine doll has all the liveliness and precision one could wish for in a toy come to life.  As the story progresses, a Classical excuse for more dancing, Anna Barnes proves herself an expressive ballerina well beyond her years in the Clara role, which she shares with Helena Thordal-Christensen.  Scurrying mice and their king delight, and when the Snowflakes usher Clara further into her dream land, Los Angeles Ballet presents its finest quality.  Despite clattering pointe shoes, the corps de ballet is both precisely synchronized and individually significant.  The absence of a soloist in the Act I finale is a testament to the excellence of the ensemble and the promise of the young ballet company.

The second act flies by with enrapturing performances, smooth choreography, and the firm foundation of the corps and company members. Katie Tomer and Drew Grant practically swim through the Arabian duet with effortless grace and fluidity.  Gould reprises irrepressible energy and charm as the Columbine.  Kheylik returns with two company members as a weightless Russian trio, and by the time a larger-than-life Mother Ginger arrives in the production’s best set piece, the whimsy of the Los Angeles Ballet “Nutcracker” is all but irresistible.  An old ballet standard is suddenly bursting with fresh energy and local flair, and ends all too soon with a very grand finale.

Melbye’s costumes are exquisite.  The tall icy headpieces of the Snowflake ensemble, the petals of the Rose, and the simple intricacies of the Hansels and Gretels reflect both a consideration of the ballet at hand and an almost child-like eye for color and detail, enriching an already decadent and compelling production.  Christensen and Neary have orchestrated and choreographed a fully realized idyllic “Nutcracker,” held onto a Petipa gesture or two, and given their Los Angeles Ballet a dazzling signature production.

Los Angeles Ballet’s “The Nutcracker” will have its final performances at the Redondo Beach Performing Arts Center, 1935 Manhattan Beach Blvd., Redondo Beach. Performances are on Saturday, Dec. 26, at 2 and 7:30 p.m., and Sunday, Dec. 27, at 2 p.m.  For tickets or more information, visit www.losangelesballet.org.