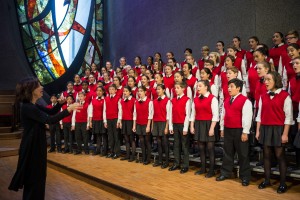 Los Angeles Children’s Chorus (LACC), one of the world’s foremost children’s choirs, rings in the holidays with special guest, Grammy Award-winning opera singer Susan Graham, and members of the Los Angeles Philharmonic in a concert featuring the world premiere of Los Angeles-based composer Paul Gibson’s Ring Out, Wild Bells – based on Tennyson’s beloved poem and arranged for chorus, organ, strings and handbells – as well as a range of sublime classical works, joyful holiday carols and poignant readings on Sunday, Dec. 3, at 7 p.m., at Walt Disney Concert Hall, as part of the LA Philharmonic’s prestigious “Sounds About Town” series.

“This evening of music and poetry was inspired by ‘A Festival of Lessons and Carols,’ a cherished annual Christmas Eve tradition introduced in 1918 by King’s College Choir in Cambridge, England, that touches on universal human experiences through thoughtful verse and moving song and has been broadcast around the globe by the BBC every holiday since 1930,” Tomlinson said in a release.

In addition to Gibson’s work, LACC performs Kim André Arneson’s Even When He is Silent and This Christmastide by British Academy Award-winning composer Donald Fraser, and reprises Dale Trumbore’s Breathe in Hope, which was commissioned for and premiered by the Chorus in May. Graham joins the Chorus for the holiday carols O Holy Night, A Christmas Lullaby and Now Have Good Day by Derek Holman.