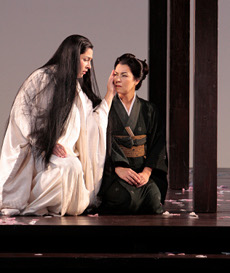 Whether LA Opera is offering Robert Wilson’s stylized “Madame Butterfly” (in 2004, 2006 and 2008) or the current Ron Daniels production, audiences might flock to the Dorothy Chandler Pavilion as predictably as monarch butterflies make their seasonal cross-continent migration. Giacomo Puccini’s opera is among the 10 most-performed operas worldwide because the music and libretto are so beautiful. Who can resist the poignant story of a young geisha who falls in love with an American naval officer, only to be deserted soon after her wedding and asked three years later to give up her son?

Maybe the staging doesn’t even matter as long as the orchestra and the voices are creating aural magic? Well, let’s not go too far. Opera is, after all, a glorious art form precisely because it captivates us in a variety of aesthetic ways: movement, acting, costumes, set design, text, music and singing all work together.

After the first act on Wednesday night, when the effusive applause from the nearly full house died down, the teenage girl seated near me said to what might have been her grandfather, “It’s so pretty. Oh, my god.” It’s a compliment to be shared by Puccini and LA Opera.

I was surprised by how much I enjoyed Wilson’s stark production in 2008, and so had high expectations of LA Opera’s latest. At first I wasn’t bowled over by the visuals. Of course, the sliding screens worked perfectly for an opera set in Japan. But overall, the palette was rather bland. None of the costumes really made an impression — with the exception of the striking black and red outfit worn by Cio-Cio-San’s uncle, who storms in to renounce his niece for converting to her future husband’s religion.

That said, the scenery (Michael Yeargan) and lighting (Stephen Strawbridge) had moments of brilliance, as when Cio-Cio-San sees Pinkerton’s ship coming into the harbor (a projection on the back wall) and she waits behind a screen all night for him to arrive, the lights ever so gradually fading to night and back to daybreak as the orchestra plays (led by the talented Grant Gershon, newly appointed resident conductor — and also music director of the LA Master Chorale). The galaxy of stars projected behind the newlyweds’ bed in the first act was similarly poetic.

The cast was outstanding, but I’m not sure I ever got used to Oksana Dyka in the lead role. Tall and full-figured, this soprano had a commanding presence very unlike the innocence one would expect for this 15-year-old character. But Dyka proved to be a powerful Cio-Cio-San who had me weeping in the final scenes.

The painful prospect of living without her husband and, finally, without her son was made all the more palpable by an adorable Garret Chang (in a silent role) as the little blond Asian boy innocent of her distress and what the final moments will bring.

Brandon Jovanovich effectively portrayed Pinkerton as a man who showed flashes of love and remorse and seemed more of a clueless tourist than an evil heartbreaker. Yet the audience could not forgive him for devastating poor Butterfly and gave him some playful boos at curtain call.

Milena Kitic was a strong and tender Suzuki, displaying a motherly concern as Butterfly’s maid that was very sincere — despite the fact that she appeared almost childlike next to Dyka.

Whether this would be your first “Madame Butterfly” or not, whether you loved the Wilson version or not, I highly recommend LA Opera’s current production. What’s more tragic than Puccini’s love story is the fact that it came dangerously close to never being written (given his early-career failures and depressions, two car accidents and ill health during the composition, and an unhappy long-term relationship). And, luckily, the opera survived its disastrous debut in 1904. Don’t miss your chance to catch LA Opera’s beautiful specimen before it’s gone.

“Madame Butterfly” continues with shows on Dec. 1, 6 and 9 at the Dorothy Chandler Pavilion. Visit www.laopera.com.