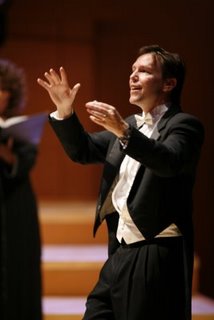 In a pre-concert discussion with KUSC’s Alan Chapman, Gershon explained that because the musical traits of folksong are intimately tied to the language and culture where they originated, they do not translate so well. Thus, the Choir had the additional technical challenge of singing in five languages (including Slovak and Karelian).

Bartók’s four “Slovak Folk Songs” (Sz. 70) fit the Master Chorale to perfection. The gently flowing “Thus Sent the Mother” was ethereal at times, having a blend that was organic in a way one can only feel. As Gershon noted, Bartók took these folk melodies and “raised them to the level of art song.” The 5/8 meter of “Where the Alps Soar so Free” comfortably flowed with graceful balance, and the lively “Food and Drink” and sanguine “Bagpipes Are Playing” snapped nicely with their brisk cadence.

Tormis’ “Forgotten Peoples’ Cycle” was based on the ancient songs of vanishing Baltic and Finnic cultures. Only one of the six groups of the larger work was sung on this program, “Karelian Destiny.” This novel regional musical argot contains harmonic and rhythmic components that sound arcane to the Western ear, but Tormis’ contemporary style easily accommodates. “The Weeping Maidens” was melancholy but warm, and the altos gave a solid performance as they were featured here and in several other songs. Alicia Kirwin Murray sang the closing lullaby so sweetly that there was no need to follow the translation to understand its sentiment.

Brahms was less the musicologist and more the entertainer in the 11 songs of his faux-folk “Zigeunerlieder” (“Gypsy Songs”), Op. 103, with its distinctively Hungarian-flavored melodies. Quintana capably guided the Master Chorale through the homeland, squeezing every bit of the intensity packed in this pithy passion-filled trek through mania and melancholy, and all of the twists between. The piano accompanist, Lisa Edwards, was outstanding, deftly supporting the Chorus at every turn while navigating Brahms’ demanding virtuosity. The ideal acoustics of Disney Hall faithfully transmitted every syllable of the sumptuous “Lieber Gott” through every forte and piano, and the sullen text of “Horch, der Wind” had nary the least bit of sibilant muddle.

Quintana and the Chorus delivered an inspired performance. But in the overall modernist context of the program, “Zigeunerlieder” somehow felt out of place; relative to the other selections it was like a musical first cousin once-removed. Also, the turning of pages in awkward unison as the audience followed the translations was distracting at some critical moments in the first half of the program, and the undimmed lights significantly diminished the ambiance.

The house lights were dimmed for the second portion of the program. Gershon skillfully painted Poulenc’s saturated colors and horizontal harmonies as he leaned into the composer’s surrealist manners. The Chorale flickered bright and dim, evoking moods light and dark, as they sang the eight a cappella “Chansons Françaises.” Gershon had earlier portrayed the music of Poulenc as “unpretentious,” and “distilled down to the essence.” The solo bass unfortunately was overwhelmed at times in the rhythmic male-only march, “Clic, clac, dansez sabots,” although the men sang “La Belle si nous etions” with a rapid, deliberate rhythm, detaching each syllable, and impressing a penetrating earthy quality.

Copland’s collection of “Old American Songs” was obviously the most linguistically and culturally accessible. I lamented that the iconic “Simple Gifts” was not included on the program, but I found myself delighted to be “in that place just right” anyway, as Abdiel Gonzales sang in the “Boatman’s Song.” The sheer horsepower of his piercing voice shook you in your seat without distracting from the simplicity of the text. Gershon’s tempos were familiar and seamless in transition, and the lovely “Little Horses” lullaby was sweet, without a trace of saccharine sentimentality. The minstrel tunes, “Long Time Ago,” “At the River,” and especially “Ching-A-Ring Chaw” were vigorously expressive in a vernacular the audience understood – iconic Americana.

The familiarity and unmistakable appeal of Copland’s music provided the highpoint of the concert, yanking at the heartstrings. The encore, Copland’s moving “Shenandoah” (Across the Wide Missouri), was especially fine. The delicate sound of lapping waves pulsed from the a cappella counterpoint, and as the rhythmic flowing melodies wound down to a precise pianissimo, we were left with a most gentle comfort to savor.

The Master Chorale, Gershon and Quintana clearly succeeded with this folk-based program. The inherent humanity of this repertoire resonated loud and clear. We left just a bit closer to each other than when we arrived. Bartók, the applied ethnomusicologist – and the other composers for that matter – would have been pleased.