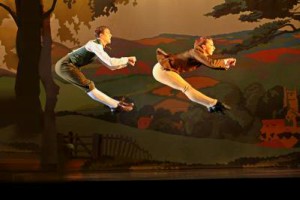 Matthew Bourne is a British choreographer who likes to tell stories with movement. His UK-based company, New Adventures, has visited Los Angeles several times with productions such as an all-male “Swan Lake,” “Play Without Words” and “The Car Man.” This weekend, he brings “Matthew Bourne’s Early Adventures,” a program of his first choreographies, to the Bram Goldsmith Theater at the Wallis Annenberg Center for the Performing Arts for seven shows between Wednesday, May 17, and Sunday, May 21. The evening shows each night start at 8 p.m. with matinees Saturday and Sunday at 2 p.m.

The quasi-retrospective program this highly acclaimed internationally prestigious company brings to Beverly Hills includes three works created at the beginning of Bourne’s career: “Watch with Mother,” “Town and Country” and “The Infernal Gallop.” The artist, a seven-time Olivier Award winner, received his first Olivier nomination for “Town and Country” in 1992. The Olivier awards are the British equivalent of our Tony awards, which represent the best in professional theater.

Premiering in 1991, “Watch with Mother — Seen but not heard?” explores competition in children’s games and is set to a Percy Grainger composition and arrangements of Bach and Faure. “Town and Country — Lie back and think of England,” created around the same time as the aforementioned ballet, is described in promotional materials as a “moving and hilarious … pastiche of national characters from bygone eras.” Evocative music by Edward Elgar, Noël Coward and, again, Grainger enhance the visual landscape. Finally, the company will present “The Infernal Gallop — A French dance with English subtitles” (1989). This uptight English view of France comes complete with traditional cliches and Jacques Offenbach’s “Can-Can.”

Being the only U.S. stop for this show’s tour, Angelenos are getting an exclusive look at what the Brits are all clamoring about.

LOCATION: The Bram Goldsmith Theater at the Wallis Annenberg Center for the Performing Arts is located at 9390 N. Santa Monica Blvd., Beverly Hills 90210

TICKETS: Tickets are $39-$99 and can be purchased at http://tickets.thewallis.org/single/PSDetail.aspx?psn=8274