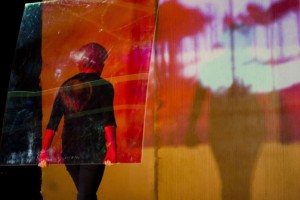 The Roy and Edna Disney/CalArts Theater (REDCAT) continues to bring new and noteworthy, cutting-edge contemporary performance work to its theater below Disney Hall. This weekend, for only three performances Thursday through Saturday, January 26-28, at 8:30 p.m., it will present “Hunter,” a highly acclaimed solo dance theater production choreographed and performed by Brussels/Berlin-based American Meg Stuart.

A collaboration between Stuart, video artist Chris Kondek and sound designer Vincent Malstaf, this 2014 work has been presented in prestigious theaters throughout Europe. Along with an unconventional movement vocabulary, “Hunter” includes home movies of the artist as a child and a score made of sound effects and quotations from influential people in the dance maker’s life. Icons like Allen Ginsberg, William Burroughs. Miranda July, Yoko Ono, Cindy Sherman and Trisha Brown are described as having left imprints on Stuart’s body that she explores in this one-woman show. The result is a series of self-portraits that have been deconstructed and edited, re-shaped and offered as an exploration of a headliner’s creative experience.

Born in New Orleans, Stuart spent time in California and graduated from New York University’s renowned dance program (alongside local dance/theater maker, Rosanna Gamson) before making her mark in Europe. She is the recipient of many international awards for herself and her company, Damaged Goods, and they regularly tour the world.

The Spanish and Portuguese newspaper, Público, reports that “More than autobiographical, ‘Hunter’ is a discreet generational and artistic testimony, and a subtle tribute to an entire era.” Says it all.