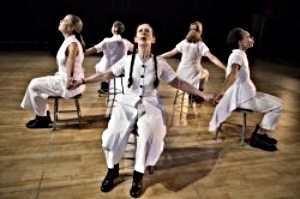 Creating a parallel universe both entirely human and otherworldly, Meredith Monk’s latest soundscape, “Cellular Songs,” floats down to our planet for only one performance, this Saturday, March 2, at 8 p.m. at Royce Hall on the UCLA campus.

“Cellular Songs” dives into our species’ symbiotic connection to the natural world. It likens microscopic biological processes such as layering, replication, division and mutation to a musical structure and quality. It presents itself as what is described in promotional materials as “a prototype for human behavior in our tumultuous world.”

Monk has earned awards, prizes and critical praise for her oeuvre since the 1970s, most recently two of the highest honors bestowed to a living artist in the United States — the 2017 Dorothy and Lillian Gish Prize and a 2015 National Medal of Arts from President Barack Obama.

She and her cohorts will only be here for a short time.