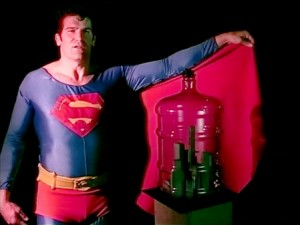 Many critics and famous artists have claimed Mike Kelley is responsible for putting the L.A. “art scene” on the map. After attending CalArts in the late ’70s under the guidance of teachers like John Baldessari and Laurie Anderson, he created an expansive network of multi-disciplinary artists, musicians and actors that he regularly collaborated with out of his Highland Park studio. His work pushes into a new frontier of honesty, confronting the spectator to challenge prescribed traditions and cultural attitudes. In the wake of his tragic suicide in 2012, he leaves a lasting legacy with an impressive portfolio of work and an even bigger cult-like following.

In association with the Mike Kelley Foundation, the REDCAT Theatre presented a special viewing exclusively of his video work on Dec. 14: “Mike Kelley: Single Channel Videos.” The curation touched on all the highlights, including the process-driven early studio work with Paul McCarthy to his more recent Lynchian one-act play production.

“Out O’ Actions” (1998) reveals a time-lapsed documentation and behind-the-scenes look of a group show Kelley and McCarthy curated at MOCA LA. Renowned artists such as Chris Burden, Valie Export, John Cage and Yoko Ono came together to push performance and process into the spotlight. The show is regarded as the first performance artist survey at a major museum, and Kelley established his influence as not only an artist but also as a leader of the industry.

“Family Tyranny” (1987) presents an insane family drama in the framework of public access TV. When McCarthy received a grant from Long Beach TV to use their facilities for two days, he asked Kelley to come in the studio and shoot an “anything-goes” sitcom meets cooking show parody under the vague guidance that, “you’re the son and I’m the dad.” Bringing their studio background to the foreground, they expose the process of their work as they violently thrash a baseball bat against a makeshift styrofoam mannequin and all the while destroy social conventions.

“100 Reasons” (1991) is a collaboration between a couple — writer Bob Flanagan and photographer Sheree Rose. Kelley reads his book Plato’s Cave, Rothko’s Chapel, Lincoln’s Profile, as the couple engages in a sadomasochistic act. It’s like watching Vito Acconci’s early work but being in on the joke. Though the work is quite graphically violent, Kelley’s clever ability to imbue the darkness with humor is what makes this piece more pleasurable than painful.

“Superman Recites Selections from ‘The Bell Jar’ and Other Works by Sylvia Plath” (1999) was originally shown in conjunction with the installation “Kandor-con,” which depicted an immersive landscape of what was the superhero’s abandoned utopia. Once again, Kelley uses pop culture to lure us into a familiar safe space only to guide us towards a new, and even distorted, reality.

“Extracurricular Activity Projective Reconstruction (domestic scene)” (2000) is a half-hour drama about two histrionic protagonists fighting for power in the confines of a simply staged studio apartment. Inspired by a found photo in a high school yearbook, Kelley unveils our culture’s obsession for nostalgic longing. The drama unfolds like a scene from Tennessee Williams’ monologue-heavy “Small Craft Warnings.” Both characters argue about the past and can seldom agree upon the sequence of events that lead them to their current disposition. Kelley blurs these memories, implicating that our past is a product of personal projection.

“Bridge Visitor” (2004) is a journey comprised of dark rituals and supernatural powers. Molotovs are thrown, plastic bags are burned, a bridge is fire bombed, and Kelley appears running naked with fear. The echoes of destruction mixed with a haunting score that sounds like a recording of an abandoned house in the woods captivates a cerebral spectacle in danger. It’s a hypnotizing spell that’s Kelley’s trademark.

For information about upcoming shows at REDCAT, visit www.REDCAT.org.