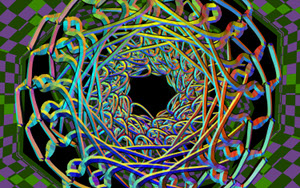 Mindshare LA feels like a new experience made from a number of familiar ones.  On its website, the event calls itself an evening of “enlightened debauchery,” and it promises “intellectual stimulation in a club-like atmosphere.” Doug Campbell, co-founder (with Adam Mefford) and MC for the July 15 event, likened the evening to having one’s brain “poked from different directions.”  It is part work party, part lecture hall, part singles’ night with cocktails.  More to the point, Mindshare LA is a monthly event with short lectures, food trucks, a cash bar, and a DJ downstairs for listening-time chatterboxes.

Thursday’s event was held at Club 740 in downtown Los Angeles for a third time, though the Mindshare location does change.  (That said, who knew our city had such breathtaking alleyway views?)  Colored lights, free soda from sponsor Izze, and local jam band Boom Boom Boom set the opening mood.  Between the overpriced and underwhelming Munchie Machine and the CoolHaus ice cream truck that lacked my beloved mint chocolate chip, the food trucks were a bust — but, like the location, the food trucks do change with each event.

In a packed dance hall turned lecture hall, complete with white folding chairs I thought I’d only ever see at outdoor weddings, Caltech types mingled with American Apparel model lookalikes.  This writer chatted with IBM brains and a fair number of marketing and brand-formation types.  Read: mixed bag.     Hats, boots, bow ties, haircuts, beards, and wacky patterns made every person stand out at least a little, and that was before any of the talking started.

At 8:30, the short form lectures kicked off with Caltech’s Frances Arnold, Professor of Chemical Engineering, Bioengineering and Biochemistry, who discussed bacteria construction and design, paired somewhat forcibly with the idea of “Molecular Sex.”  (Sex prevailed as the evening’s theme.)  Arnold’s talk was brilliant and brief, and successfully piqued the audience’s attention.

The next lecture came from branding mind Eduardo Caccia, a riff on culture and attitude south of the border — in retrospect, an almost awkwardly powerful reminder that the subset of urban Americans at Club 740 for the evening may not have been as enlightened as they thought.

A quick video from Hear Me passed along the mere idea of using online music composition to unite orphans across the globe; sonic artist Mileece represented the New Age with her art-and-sound installations based on feedback from plants.

When adult-film star Nina Hartley finally arrived to breeze through her principles of Radical Self-Acceptance, the somewhat forced sexual implications in every lecture came together.  I’m pleased to report that the Hear Me table and Nina Hartley’s sex-advice table seemed to have the longest lines in the post-lecture fair that the upstairs dance floor became.  None of the miniature lectures delved far into their subjects, though Mileece may have tried to do that.  Each could either pique just enough individual interest for a table visit or pass along information with as casual an acknowledgement as a Twitter feed.

To Mindshare LA’s credit, the evening reads and runs like an Internet browser window.  Everywhere there are tabs (like at the reasonably priced bar, for instance) and bookmarked (literally and figuratively) things to Check Out Later.  Everyone is checking messages and chatting.  Even as the noisemakers during the lectures were asked to relegate their conversations to Dr. Rx and DJ Sugarpill’s rooms downstairs, the Twitterers, bloggers, writers, text message addicts, and combinations of such stayed multiply occupied throughout the evening without offending a soul.

A self-help plug and a prize giveaway broke up the lecturing.  (I recommend J-Walt’s digital art, one of the best post-show installations.)  This was the only time the cleverly partitioned schedule for the evening felt fractured, and even the universal challenge of the Good Q&A seemed aptly met by the Mindshare LA production crew.

With an age- and appearance-range to skew the average years and lifestyle upward and inward, Mindshare LA reminded me somewhat of being at a little liberal arts college in Ohio that I used to know.  This is not necessarily a good thing.  But in the curious, questioning, happy-go-lucky, brain-teased mood of the evening at large, Campbell answered my sole question for him with poise and a smile.  Confronted with the fact that such a narrow margin of people in a clearly privileged atmosphere were perhaps doomed to objectify and demean the very classes and kinds they were purporting to include in Changing the World plans, Campbell basically replied: “I’ll think about it.”

Mindshare LA is a monthly event found online at www.mindshare.la and around downtown Los Angeles.  General admission is $30, with food trucks outside throughout the event.  Lectures are available online, a la TED, and Mind Share is on Twitter and Facebook.