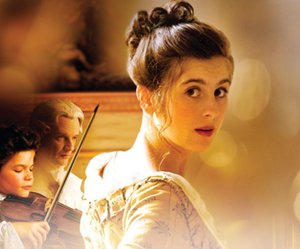 Knowing full well the celebrity and genius of Wolfgang Amadeus Mozart, and no doubt having seen Milos Forman’s “Amadeus,” it’s probably difficult to imagine a movie where Mozart is only a very minor character, no less one overshadowed by his older sibling. But that’s just what the intriguing and exquisitely composed “Mozart’s Sister” offers.

Writer, director and producer René Féret has conceived a fictional account of the young Maria Anna “Nannerl” Mozart, a poignant tale inspired by a heartbreaking reality: despite being a musical prodigy in her own right, Nannerl will forever be known simply as Mozart’s sister. At a young age, she is essentially forced to give up her musical endeavors when her father Leopold, who is, in Nannerl’s words, “hungry for glory” and the favor of the courts, finds his best hope in the precocious genius of Wolfgang.

But it’s also clear that because she was born a girl in the 18th century, Nannerl could never have become as famous as her brother. As a teenager, Nannerl (played by the director’s daughter, Marie Féret) is forbidden to play the violin or compose by a father — and a society — that believed those activities were inappropriate for women. When she asks her father to include her in his composition lessons with Wolfgang, he adamantly refuses, saying that such skills and knowledge of harmony and counterpoint are beyond the comprehension of most people, but especially women.

The 14-year-old reminds her father that she helped with one of Mozart’s compositions when he was 5 and had written sonatas, but Leopold dismisses them as “absurd notes lumped together.” Nannerl’s mother would like to encourage her daughter’s obvious talent, but it is the son of Louis XV in Féret’s story that does so by commissioning work from her.

Since there are no surviving compositions by the real Nannerl, Féret asked pianist/composer Marie-Jeanne Séréro to create music befitting the famous musical family — a monumental creative exercise. The music is lovely, equally a character in the film, but don’t expect any famous compositions from Wolfgang — he’s only 10 in the movie.

Féret was inspired by Leopold Mozart’s letters and narrative accounts of a three-year journey visiting the courts of Europe where his children performed. Féret said in his director’s statement, “I discovered and fell in love with Nannerl. … I remembered other female characters such as Camille Claudel and Adele [Hugo], doomed to a footnote in history due to their gender and family of origin. I knew that I wanted to make a film.”

The film follows these years of concerts, focusing on Paris, in which Nannerl played harpsichord and sang while Wolfgang played violin. The imagined relationships with the daughter (Féret’s second daughter Lisa) and son of Louis XV help Féret move the story along and bring emotional intensity. Louise de France, whom Nannerl befriends in an abbey, and the Dauphin Louis de France, who falls in love with Nannerl, are both clever characters who reveal much about their private lives. Nannerl’s relationships with them provide a superb device for exploring the gender roles of the time and the sometimes-cruel ways convention altered her future.

“Mozart’s Sister” is indeed a beautiful composition, sure to delight classical music lovers… and help them imagine what could have been had the female Mozart been given an equal chance.

From Music Box Films. In French with English subtitles (that are thoughtful and often poetic, not oversimplified as can often be the case in translations). Official Selection in six film festivals. “Mozart’s Sister” opens Friday, Aug. 19, at Laemmle’s Royal Theatre in West LA, Playhouse 7 in Pasadena, and Town Center 5 in Encino.