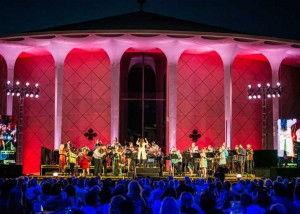 Conductor and Artistic Director Rachael Worby and the orchestra, based in Pasadena, have dedicated their Summer of Sound concerts to the music and influence of George (and Ira) Gershwin. Rachael is an arts entrepreneur, and her artistic vision shapes MUSE/IQUE, weaving dance and contemporary music into her “classical” programming with a host of diverse guest artists.

Read Culture Spot reviews of Juber and Lil Buck — you’ll want to see them at MUSE/IQUE!

PERFECT/UNION maximizes conventional collaboration for thrilling new experiences, exploring how music, song and dance make a PERFECT/UNION for summer entertainment. The first concert in the series pays homage to the traditional duos and collaborations that have paved the way honoring George and Ira Gershwin. Experience the music of power pairs including Bacharach & David, Alan & Marilyn Bergman, Lennon & McCartney and more.

AMERICAN/RHAPSODY melds together a dizzying array of genres including classical, ballet, and jazz. George Gershwin created a sound just as big and alive as America itself, and this program focuses on the music that influenced Gershwin and the music Gershwin influenced. Whether it is jazz or classical, we can hear the exchange of big ideas between these giants of modern music.

SUMMER/TIME reimagines Gershwin‘s complex, heartbreaking and beautiful contribution to the American opera, “Porgy and Bess,” in a musical storytelling of one of Gershwin’s most complicated works. MUSE/IQUE invites back director Matthew McCray to seamlessly weave the worlds of theater and music together in ways not yet seen or heard by audiences.