Music at the Marina 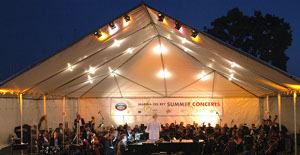 Thursday, July 9, brought the opening performance of the 2009 Marina del Rey Summer Concert Series in Burton Chace Park at 13650 Mindanao Way. The ambitious program featured “Serenade to Music” by Ralph Vaughan Williams, “Gloria” by Francis Poulenc, and “Carmina Burana” by Carl Orff. I suppose when you have the 82-member Southern California Master Chorale and the Marina del Rey Summer Symphony at your disposal, the musical offerings can be ambitious.

The first half of the program celebrated God and Country, opening with “The Star Spangled Banner” and ending with Poulenc’s “Gloria.” Sweeping musical styles, dramatic instrumentals and soprano Lori Stinson grabbed the attention of the unsettled crowd, which included people out and about, huddled under blankets, and wandering near the waterways enjoying frozen treats.

Chorale conductor Sheridan J. Ball joined Music Director and Symphony Conductor Frank Fetta in keeping the musicians in time, not an easy feat in an outdoor venue. The stage was draped in white canvas, which helped to shelter the singers and musicians, including an extensive percussion session, from the distractions inherent in an al fresco venue. Fetta has been conducting the series since its inception in 2000.

Poulenc’s “Gloria” contains such an array of distinct musical styles within the 25-minute work that I wrongly assumed it was a medley and wondered why the program referenced only Poulenc. My classically educated friend laughed at my ignorance and, in service to CultureSpotLA readers, introduced me to Maestro Fetta during the intermission. A friendly, passionate man, he explained Poulenc’s history as a 19th-century French composer running with “Les Six,” a group of fellow composers who rebelled against both traditional and modern musical dogma. The Maestro explained that he enjoys presenting works like Poulenc’s “Gloria” and Orff’s “Carmina Burana” because of their unconventional structures. “They’re great fun,” he said, and warned me that my sensibility might be similarly challenged by the evening’s final piece.

The raucous “O Fortuna” called the audience back to their seats in dramatic fashion, but prior to that, host Rich Capparela from classical KUSC tipped off the audience to what Fetta had hinted: the wild ride of “Carmina Burana.” Capparela explained that the piece was culled from various songs originally penned throughout medieval Germany and included an interlude, featuring tenor Steve Grabe, singing a tale told from the perspective of a roasting swan complete with flowing juices, blackening skin and bared teeth. I Binged it. (Bing is the new Google.) It’s true.

Orff’s bold mix of musical themes supporting the story told in the songs, stories of the fickle nature of the wheel of fortune (that is life as we know it), struck me as an inspired programming choice in light of today’s uncertain times. Baritone Ralph Cato joined chorale soloists Stinson and Grabe.

Upcoming programs in the Thursday Summer Symphony series promise to be equally intriguing. On July 23, “A Night at the Opera” will present finalists and winners from the Loren L. Zachary National Vocal Competition singing arias and ensembles from popular operas. On Aug. 6, the orchestra will play works by Claude Debussy and Aaron Copland and feature soloist Rufus Choi, winner of the Jose Iturbi International Piano Competition playing Sergei Rachmaninoff’s Concerto No. 3.  On Aug. 20, the series welcomes musical legends Dame Cleo Laine and Sir John Dankworth and Friends for a concert of orchestral classics from jazz to Broadway. The concerts begin promptly at 7 p.m., and admission is free.

Parking costs $5 parking in nearby lots. For those of us watching our pennies – and who isn’t? – free parking is available about half a mile away at Dock 52, 13501 Fiji Way, between Admiralty Way and Fisherman’s Village. A free shuttle runs every 30 minutes on the hour and on the half hour. You’ll probably want to bring money for coffee, which was thankfully sold at the event because, even in the summer, it gets chilly by the water, especially after sunset.

There is also a Saturday series at Burton Chace Park with pop concerts at 7 p.m. On July 18, Christine Andreas, a two-time Tony nominee, will perform Broadway classics accompanied by composer/pianist Martin Silvestri. On Aug. 1, the Four Aces will revisit the ’50s, performing songs from their heyday. On Aug. 15, John Davidson, recording artist and award-winning Broadway performer, will showcase his talents in his debut appearance at Burton Chace Park. On Aug. 29, Sue Raney will close the series by performing some of the songs from her new album, “Heart’s Desire,” a tribute to Doris Day.