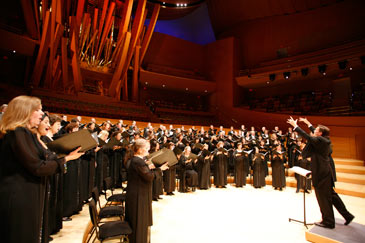 Grant Gershon, in his 10th year at the helm of the Los Angeles Master Chorale, joined with new Assistant Conductor Lesley Leighton to skip across the pond and over the eons to spotlight the British choral tradition in another great production at Walt Disney Concert Hall on Jan. 30.

Leighton soared in her debut as she skillfully guided Britten’s Hymn to St. Cecilia with her sensitive direction.  Her style was quite different from Gershon’s, but the result was exquisite as she and the singers connected to bring Britten’s iconic music to life with a unique personality.  The Chorale responded to her every gesture; the phrases were controlled and nuanced to a degree of fine perfection.  The singers portrayed lightness at times and a convincing largeness at others, and the solo sopranos Tamara Bevard and Claire Fedoruk, mezzo-soprano Nike St. Clair, tenor Daniel Chaney, and bass Reid Bruton were brilliant in their roles.

The West Coast premiere of Judith Weir’s Two Human Hymns was for me perhaps the most unique piece of the evening.  The score was written in 1995 for a six-part choir, and based on poems by 17th-century English poets George Herbert and Henry King.  Organist Paul Meier was superb navigating the intricate accompaniment to this distinctive work.  The sound was warm, although modern, and brilliantly contrasted the early works on the program.  The versatility of the singers was outstanding.

Elizabethan composer William Byrd’s Four-Part Mass in D opened the program in typical Gershon fashion to ground the audience with an elegant example of the seminal formal style.  The four voices of the Chorale were spatially separated on the stage, and the physical separation between them was not lost in the magnificent acoustics of Disney Hall.  We were settled and calmed by its beautiful flowing counterpoint, but the ending was subtly intense; the quiet anguish of the Agnus Dei was palpable.

The Agnus Dei of Britten’s Missa Brevis was equally evocative; the sound was uniquely Britten with its comparatively dense harmony and dramatic dynamic contrasts.  The women’s voices blended superbly in the Hall, and the solos by soprano Risa Larson and mezzo-sopranos Kimberly Switzer and Drea Pressley were each uniquely elegant.

John Tavener’s beautiful Song for Athene, the music we immediately recognize as the funeral recessional for Princess Diana, was profoundly moving.  The performance was particularly jarring in its stark simplicity. The deep hollow intervals pierced the Hall with an unrelenting drone of energy, while the purity of the voices, especially the lower voices, piqued the senses.  The association with Diana is inextricable, and I could not suppress the vivid memory of the eerie “changes” of the bells as sounded at Diana’s funeral overlaying it.  The Chorale delivered a magnificent performance of this unforgettable piece of history.

The night ended with a party, as we were treated to a sampling of English madrigals.  Gershon prepped the audience to expect a healthy dose of “fa-la-la-la’s,” and he delivered on that promise, especially with Thomas Tomkins’ See, See the Shepherd’s Queen, Thomas Greaves’ Come Away Sweet Love, and Thomas Weelkes’ Sing We at Pleasure.  It was easy to get swept away by these delightful tunes.

Gershon seemed to especially enjoy the madrigals, and his persona was expressed in whole-body gestures and vivid facial expressions that vicariously touched the audience as well.  John Bennet’s All Creatures Now was particularly nice in its phrasing and cadence, and the dynamics made it jump.  The basses effectively carried Thomas Morley’s April Is in My Mistress’ Face, and Orlando Gibbons’ The Silver Swan was the most luscious and rich of the madrigals, and the singers nailed its intriguing forward-sounding harmonies.

The Hall was filled with enthusiastic appreciation for a night well spent.  The encore was the traditional folksong My Love, My Love. The arrangement was considerably more musically substantial than the madrigals, and so provided a perfect farewell for the evening: so familiar and comfortable, so beautiful.

What an extraordinary Chorale we have, and how special it is to experience them in our Walt Disney Concert Hall.  Bravo!