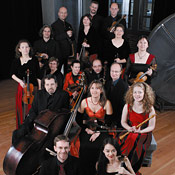 Akademie für Alte Musik Berlin embarked on its U.S. tour Wednesday evening, March 2, with a debut at our Walt Disney Concert Hall of its most authentic version of the “Best of German Baroque” from Bach, Telemann, and Händel.

The soloists were each remarkable, although I was especially impressed by Anna Fusek and her virtuosic mastery on the recorder.  Violinist and Concertmaster Georg Kallweit was engaging to hear and watch as he commanded the stage as leader and soloist.  Flutist Christoph Huntgeburth coaxed a wonderfully warm, controlled, even timbre from his wooden single-keyed instrument, and his expressive playing and virtuosic execution engaged the audience several times during the evening.  Harpsichordist Raphael Alpermann’s moment was an extended solo cadenza that was extraordinary.  His sound was fluid, and his exactness of timing, agility, and ability to sing his gorgeous instrument were glorious.

Telemann’s Overture (Suite) in C major, TWV55: C6, served as the opening.  The performance was expressive in its melancholy minor key and solemn tempo.  The orchestra stood in a semicircle around the harpsichord that was perpendicular to the audience, the violins were separated, with three on either side of the stage, and the theorbo/guitar was situated toward the front, which made it clearly audible.  The bassoon, flute, and recorder were in the center behind the keyboard, producing a sound that blended well, although almost completely lost to the ear at times.

In Bach’s Brandenburg Concerto No. 5, BWV 1050, Huntgeburth shared soloist duties with violinist Kirstin Erben, but Alpermann often pushed into the foreground to join them.  I surely appreciated hearing the trio in their unaccompanied passages.  The blend of the flute and violin was remarkable; their instruments had a unique commonality of timbre that melted easily together in duet, while their individual characters were still preserved by the acoustic of the Hall.

Bach’s invention is always fascinating, and the ensemble was impressive and effective, with clockwork precision.  The keyboard had a major role that included an extended virtuosic solo cadenza at the end of the first movement.  Alpermannn was superb, and he received an impromptu ovation between movements that was truly deserved.

Bach’s Violin Concerto in E major, BWV 1042, made Kallweit’s talent immediately evident in the opening solo.  As the orchestra opened aggressively, Kallweit’s violin entered with a suspenseful long-held tone, then released it with a fine aesthetic expressiveness.  His instrument was one in mind, body, and soul.  Kallweit was exuberant in the final movement in a playful, sometimes intense, back-and-forth with the orchestra, that at times pushed his violin to its limit.  His brief, albeit brilliant, bit of virtuosity in the final solo was emphatic, and drew an enthusiastic response from the audience.

Händel’s Concerto Grosso in F major gave a dramatic flair that was a nice development in the program, and gave us the best overall performance of the evening from the ensemble as a whole.  The music was inherently alluring and the performance was exuberant, with multiple soloists and diverse combinations of instruments and manners.  The Largo was an especially nice segment.  The opening Andante larghetto processed in solo and duo gliding over a walking continuo.  The Largo was stately, and again Kallweit and Erben produced an authentic elegance.  The Andante was rich and full-bodied; cellist Jan Freiheit stood out, leading and grounding the ensemble with verve.  The Allegro featured a duo of violins that were spatially separated across the stage, their intricate lines weaved and coalesced and the Hall acoustics supported the effect well by maintaining their perceptual separation.  The final cadence was beautiful, expertly timed and executed.

Telemann’s Concerto in E minor for Recorder and Flute, TWV 52:e1, was a singular moment of the program. Fusek and Huntgeburth were extraordinary in their recorder and flute duo.  The ornamentations were perfectly coordinated as the details of the trills were of one mind.  The synchrony between them was uncanny.  Fusek had such a sweet sound and impeccable technique that resonated in my memories long after the event.  The Allegro sizzled as the soloists traded passages with the orchestra, and the Presto finale was lightning fast and electrified in its energy.  The audience could not help but engage as a tambourine and ratchet punctuated the folksy last movement theme.

Congratulations to the Baroque Variations and to the Chamber Music Society for an event of the highest caliber.  Bravos to all involved!