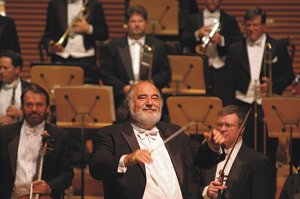 Once again Victor Vener proved himself the master of popular programming, combining John Williams favorites with excerpts from Wagner’s Ring Cycle and an arrangement of Howard Shore’s music for The Lord of the Rings: The Two Towers. I had the pleasure of listening to the California Philharmonic‘s concert on Sunday afternoon, July 25, at Walt Disney Concert Hall. Those who prefer a picnic with their entertainment can enjoy the same program on the preceding Saturday evening at the Los Angeles County Arboretum and Botanic Garden in Arcadia.

The concert opened with Olympic Fanfare and Theme (1984), which Williams composed for the Los Angeles games. After years of hearing the fanfare theme repeated for subsequent games, we were treated to a rendition of the entire suite.

Before performing the Wagner set that followed, Maestro Vener asked the audience how many had attended the Ring Cycle at LA Opera. Very few raised their hands. I mention this detail to underscore the importance of what the California Philharmonic accomplishes. In one weekend, Vener introduced hundreds of listeners to Wagner. Vener selected three excerpts: “Siegfried’s Rhine Journey” from Götterdämmerung, “Forest Murmurs” from Siegfried, and, the most familiar, “Ride of the Valkyries” from Die Walküre. The cellos went astray a bit at the beginning of the “Rhine Journey,” and the tempo for the “Ride of the Valkyries” was a bit tame for my tastes; otherwise the CalPhil presented a pleasing set.

The first half closed with Williams’ music from E.T.: The Extra-Terrestrial, which clearly, as Vener pointed out, has its roots in the orchestral language of the 19th-century.

Williams’ Superman March opened the second half with great energy, followed by a lovely arrangement by Brubaker of music from Shore’s score for The Two Towers. The concert closed with a crowd-pleasing selection of Williams movie favorites. The first, “Viktor’s Tale” from The Terminal, showcased the artistry of Michael Arnold, principal clarinetist. Dennis Karmazyn played the theme from Schindler’s List, arranged for cello instead of violin. I beg to differ with Vener — while the principal cellist played it well, I prefer the original scoring for solo violin.

The program closed with Williams’ most popular score, Star Wars. The ensemble performed a suite that included “The Imperial March (Darth Vader’s Theme),” “Yoda’s Theme,” and “The Throne Room and End Title,” which the audience responded to with a standing ovation. Their enthusiasm was rewarded with an encore, perhaps Williams’ next-most-popular tune, the “Raiders March” from the Indiana Jones films.

There are two programs remaining in the CalPhil summer festival: Frank, Tony and the Maestro on August 7 and 8 and Beethoven and Broadway on August 21 and 22. For information, call (626) 300-8200 or visit www.calphil.org.