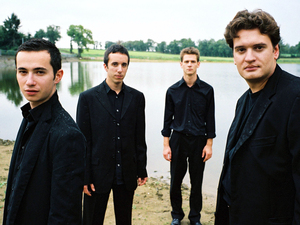 The Colburn Chamber Music Society brought Quatuor Ebène and its signature Debussy to a full house on Oct. 10 to open the 2011-2012 season at Zipper Hall.  The Ebène Quartet has enjoyed meteoric fame since it was awarded “Recording of the Year” at the 2009 Classic FM Gramophone Awards for its disc of Debussy, Ravel, and Fauré string quartets.

The quartet’s notoriety is immediately understandable when you hear it. This live performance of the Debussy String Quartet in G Minor was extraordinary, not only the interpretation, but also its superb execution.  The ensemble was of one mind, from the musicians’ coordinated, distinctive European black attire to their musical spirit that was seemingly unbridled, although never struggling, in a delicately flowing art.  They were authentic and authoritative in their Impressionist manners while also overtly fresh and in the moment.

The synchrony among the players was astounding.  Their individual and collective extra-musical gestural cues added a palpable new dimension to the sound that somewhat explained its unparalleled cohesion.  They moved as a single organic instrument.  Whether their movement was the result of their music or their music was the result of their motion was unclear; it was likely a bit of both.  The gentle to and fro leaning of their bodies and perfectly coordinated bowings were accompanied by unison directional gazes toward a shared aesthetic vision that seemed to guide them blissfully through Debussy’s quartet.

The Ebène players split their duties across two ensembles of Colburn artists to perform Bohuslav Martinû’s delightful La Review de Cuisine and Arnold Schoenberg’s moody Verlärte Nacht.  The joy and happiness of Martinû’s amusing music was a nice counterbalance to the heavy Schoenberg finale, but as good as both of these performances were, the Debussy scheduled between them on the program was in a class by itself.

Martinû’s absurdist drama is a one-act jazz ballet scored for clarinet (Sang Yoon Kim), trumpet (Conrad Jones), bassoon (Michael Zuber), cello (Ebène’s Raphaël Merlin), violin (Ebène’s Gabriel Le Magadure) and piano (Anton Smirnov).  Merlin impressed his seal on a great performance as he drove the ensemble with his sedulous technique that glued the ensemble solidly together.  We could see the affect in his face and hear the feelings of his touch, the glances between him and Le Magadure spoke volumes as both of them filled the room with full-bodied timbres and deliberate phrases.  Each of the winds and Smirnov created some memorable moments with Martinû’s lively composition.

The post-intermission segment was Schoenberg’s intense Romantic string sextet, Verlärte Nacht (Transfigured Night), written as a young and passionate expressionist.  Its programmatic ties to Richard Dehmel’s poem of the same name provided a framework on which he portrayed sometimes jarring emotional states that were often dark and complex.  Ebène’s Pierre Colombet and Mathieu Herzog imbued eloquence to the performance that was undeniable, and both were brilliant in their crafting of the ensemble’s sound. Colombet was expressive as he adjusted his brow in anticipation of his attacks or accompanied his phrasings with a nuanced drop of the mandible; occasionally he would round his lips or stretch the corners of his mouth as if adding a resonant voice to the strings.  Cellist Ronald Leonard, long-time principal of the Los Angeles Philharmonic, had a wonderful, evocative, warm sound that seemed to beckon the attention.  Colburn violinist Elicia Silverstein, violist Anna Kolotylina, and cellist Mindy Park rounded out the sextet, and all had stellar moments in solo and ensemble.

Quatuor Ebène provided a truly wonderful opening to the Colburn Chamber Music season.  Bravi to them and to all of the impressive Colburn artists!