On April 13, the Pasadena Conservatory of Music presented its fourth “A Tour Through Time” concert with guitarists Scott Tennant and Jason Yoshida at the Norton Simon Museum.

Scott Tennant, of the Grammy Award-winning Los Angeles Guitar Quartet, proved to be a master among masters in the Norton Simon galleries with his incomparable display of guitar artistry and technique.  All who experienced it will recount the magic of this performance many times.

The concert moved from gallery to gallery with spoken narratives about the paintings, sculptures and music to integrate the experience.  Betty Duker, local art collector and lecturer, introduced each gallery with her insightful comments that at times waxed poetic.  Carlos Rafael Rivera, composer and guitarist of note himself as well as faculty of the Pasadena Conservatory of Music, focused the musicological aspects of the program. 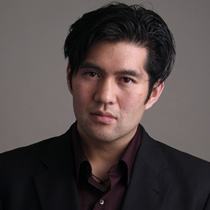 The first stop on our sonic voyage was the gallery of the 14th to 16th centuries, where virtuoso Yoshida played guitar, lute and theorbo from the Baroque and Renaissance repertoire.  Imagine Lucas Cranach’s iconic “Adam and Eve” paintings with the Madonnas of both Raphael and Botticelli in a near field of view.

The opening segment showed not only the spirit of the time, but the evolution of the musical art and the historical development of the guitar and lute.  Hearing this magnificent program illuminated by the extraordinary art of the greatest Renaissance masters was a truly rare and special treat.

In her introduction, Duker pointed out the serenity in the midst of commotion seen in Jacopo Bassano’s “Flight Into Egypt.” How timeless that theme is, not only in the music of that era, but even now it can describe LA’s own distinctive new music scene.

Yoshida’s small Renaissance guitar with only four courses of doubled strings had a sweet, clear sound.  The Fantasia by Miguel de Fuenllana and Alonso Mudarra’s Romanesca were authentic.  The Baroque guitar was larger than its Renaissance ancestor with five courses, and Yoshida had a particularly light touch that was exact yet expressive and brought out the sophistication of the music of Santiago de Murcia and Francesco Corbetta.

The Baroque lute was only a very distant cousin of the guitar with its 11 courses, and it demanded a very different technique that Yoshida managed capably with the Prelude and La Cascade by Ennemond Gaultier.  The most interesting instrument was the theorbo with its five courses and long extension for bass strings.  It looked impressive, and its sound was indeed rich with mellow timbres and an expansive range on the pieces by Johannes Hieronymus Kapsberger and Alessandro Piccinini. 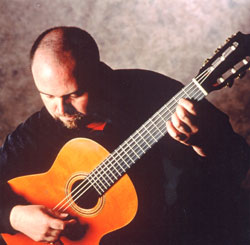 Enter Tennant.  I knew what to expect, but did not anticipate literally being stunned by his impeccable technique and extraordinary artistry.  From his first pluck, the audience was mesmerized.

Virtuosity, drama and ornamentation captivated the listener.  Tennant’s expressions were undeniable, and we heard legerdemain rarely achieved; his skill and control of the instrument were extraordinary.  Fernando Sor’s Variations on a Theme of Mozart, Op.9, the only piece in this segment of the concert actually written for guitar, was the perfect vehicle to showcase Tennant’s ability. He completely swept away the audience with his brilliance.

The final segment of the program found us surrounded by the works of Picasso, Klee, and Kandinsky, among other 20th-century masters.  Curiously, they seemed to have a patina of familiarity and comfort, and even the dissonance of the 20th-century manner was fully comfortable, now an old friend.

Tennant treated us to the magnificent music of Cuban Leo Brouwer, and the complex harmony of our modern era put Mozart long behind us.  The selections included Homenaje a Falla, Pieza sín Título, and Danza del Altiplano, and Tennant managed the full range of timbres and techniques required of the modern guitarist.

The night closed with the music of Joaquín Rodrigo: En Los Trigales and the Adagio from Concierto de Aranjuez (arranged for guitar and chamber ensemble by Shura Sasaki).  Rivera showed his abilities as conductor, as the ensemble members, all faculty of the Pasadena Conservatory of Music, joined Tennant for the now-popularized Adagio theme.

The faculty ensemble included oboist Paul Sherman, often seen with top-tier ensembles and as director of the Ensemble Green, and bassist Timothy Eckert, known in Los Angeles as both a performer and a composer. Violinists Sharon Harman and Emily Walczak are active studio performers, and violist Mary Kelly, currently department chair, and cellist Abby Scoville are recognized as up-and-coming artists and lecturers in Southern California.

Sherman’s opening solo of the Adagio infused the entire chamber with his rich, exceptionally warm English horn sound.  His interpretation was distinctly emotive, and the lower range of the instrument was particularly resonant in the room.  The alluring theme ebbed back and forth between Sherman and Tennant, building into an exquisite sonic fabric singularly Rodrigo.  The strings blended beautifully, and Scoville’s cello provided an especially nice foundation to the section and her solos were nicely in character.  The night ended with a flourish of rising harmonics that simply evaporated into the ethereal ambiance of the genius surrounding us.

The art was incomparable.  The history, musicianship and interdisciplinary nature of the program coalesced into an exceptionally fine experience; frankly, I have rarely been so impressed by such production and artistry.  Bravo!

Obviously, there are constraints on a concert in an art gallery, and the ambiance definitely contributes at least as much to the perception of the music as does the sound, but the small stage was directly in front of a large opening to another gallery, and the rear of the audience was similarly open.  The resulting acoustical loss and delay of first reflections were significant.  The intimacy of the setting compensated somewhat; with the entire audience in close proximity to the performers, it was easy to experience the absolutely clean and sedulous technique of Tennant, whose virtuosity and sensitivity would sound wonderful in any room.

Kudos to the Pasadena Conservatory of Music, their Board of Directors, the faculty and staff, the Norton Simon Museum, and their many supporters, especially Patricia Ketchum, whose generous gift made this event possible.  A fantastic concept, well executed. Let’s hope there will be a fifth installment of “A Tour Through Time.”