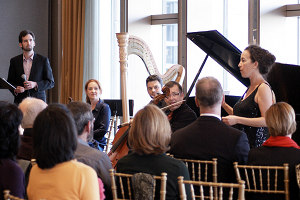 Le Salon de Musiques magically transformed the fifth-floor banquet room at the Dorothy Chandler Pavilion into an intimate salon space for sharing the joy of their special music on Sunday, Feb. 26.  Music Director Francois Chouchan combined Impressionists Gabriel Fauré and Francis Poulenc with an interesting variant from across the channel by English composer Sir Arnold Bax.

Musicologist Julius Reder Carlson set the context as “oceanic,” and in the discussion afterwards with the performers, harpist Marcia Dickstein was especially informative about the music of Bax.

Flutist Pamela Vliek and pianist Steven Vanhauwaert opened the program with Poulenc’s Flute Sonata with Piano.  Vliek is a graceful flutist, and it was fun to hear her Poulenc interpretation.  Her lower-register sound was rich and her altissimo was also full-timbred and pleasant, never piercing or thin.  Her control was masterful.  She was nimble and articulate, and with Vanhauwaert’s equally light touch, the two of them perfectly captured Poulenc’s personality.

Violist Victoria Miskolczy joined Vliek and Dickstein for Bax’s Elegiac Trio for Flute, Harp and Viola. I was struck by the beautiful timbres of Miskolczy’s instrument, the low-register melodies were distinctly rich and robust.  Dickstein’s harp filled the room with wonderful, flowing ephemeral impressions that enveloped and lifted Bax’s beautiful melodies.  The ensemble breathed as one organic being.

Vanhauwaert and Miskolczy were joined by violinist Tereza Stanislav and cellist John Walz to conclude the program with Gabriel Fauré’s Piano Quartet No.1 in C Minor, Opus 15. The strings were lush in ensemble, and in the scherzo their characteristic sforzandos and intricate dynamic nuances floated above the undercurrents from Vanhauwaert’s piano.  Stanislav’s melodic touch was light and delicate, and I enjoyed her leadership in the ensemble. I really enjoyed Walz’s lyrical adagio passages: they were expressive and engaging; he is a master.

Local luthier Mario Miralles was in the audience because two of his instruments, Miskolczy’s viola and Walz’s cello, were crafted by him.  It was fun to hear sibling instruments.  The rich timbre and radiance of both were magnificent.  I heard Los Angeles Philharmonic Principal Concertmaster Martin Chalifour compare his 300-year-old Stradivarius to his modern Miralles violin at a recent meeting of the Los Angeles Chapter of the Acoustical Society of America in the Music Hall at California State University Los Angeles last week, and was truly impressed by the comparison both subjectively and acoustically.

Le Salon de Musiques offers one of the finest chamber music experiences to be found in Los Angeles.   My delight was undeniable: the music was so present and engaging, and there was a palpable sense of community with the inspiring artists and their music.

All concerts include food by Patina and Champagne and are held from 4 to 6 p.m one Sunday of every month through May 20, 2012. Visit www.lesalondemusiques.com.