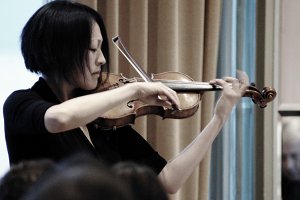 An enthusiastic and appreciative Los Angeles audience was transported to a time in Paris long past through Le Salon de Musiques with Debussy, Saint-Saens and Ravel Sunday afternoon, March 20, in the Impresario Room on the fifth floor of the Dorothy Chandler Pavilion.

Artistic Directors François Chouchan, Bernard Philippe, and Phillip Levy assembled an outstanding program that was dedicated to the Japanese people and their struggles in Chouchan’s opening greeting.  A short preamble by musicologist Reder Carlson placed the music in context, describing the historic significance of the “salon” in French culture, underscoring the epicene qualities of intimacy and immediacy in the music, the musicians, and the ideals of the day.

The musicians were situated at floor-level with the listeners intimately wrapped around them in shallow semicircular rows.  A wall of north-facing windows surrounding us on two sides overlooked the iconic urban hillside landscape of Los Angeles.  Mist and clouds encompassed the view, giving it an unscripted impressionist ambiance.  The rear wall of the rectangular salon was paneled halfway to the high ceiling to render a surprisingly good acoustic.  I savored the purity and effulgence of the mostly direct sound.

The high point of the evening was the third and final work on the program: a stunning performance of Ravel’s String Quartet in F Major.  The ensemble sound was striking, and the performance will register as among the most memorable of the year.

Sarah Thornblade was breathtaking at times; she is one of the great violinists of Los Angeles.  Her attention to detail was meticulous, and she seemed to really connect to the soul of the music.  Her inspired leadership of the quartet was vigorous and imprinted a lingering impression.

Cellist Andrew Shulman was conspicuous with his deep, rich tone, supported by his incredible technique and depth of affect.  The entire room resonated with his instrument.  His pizzicato was undamped, beautifully full, and his lyrical melodic touch was such a pleasure to hear.  The plaintive Allegro moderato had a breath-like prosody.

Violist Rob Brophy and second violinist Searmi Parks seamlessly tied melody and accompaniment effects together.  The blend among the ensemble members was consistently superb, even at pianissimo levels.  The rhythmic Assez vif was effervescent with its characteristically bubbly tremolos, trills and dynamic bursts.

The rancor originally incited by Ravel’s controversial quartet, especially its closing Vif et agité movement, is difficult to understand, given how we now hear it as so obviously brilliant.  This edition exuded dramatic energy at every turn, and the not-so-subtle builds and releases made for an exciting ending, closing the program with a flourish like the uncorking of a fine champagne.

Debussy’s Sonata in Trio for Flute, Viola and Harp L 137 was the opening and most defining of the French style as our modern ears have come to assign it.  Its lack of harmonic tension, undulating rhythms and melodic stasis were described by Carlson as metaphoric clouds interacting on a large scale but without clash or pathos.

Flutist Pamela Vliek had an exceptional timbre that brushed her Debussy with warm hues and nuanced affection.  In the opening Pastorale, Vliek was captivating with her ability to meld with the harp and viola; she shaped her attacks and touch to match them, especially in the mellow timbres of the lower register.  Her rich, organic sound was wonderful.

Brophy was capable whether in duo, trio, or solo, and his unique style was engaging.  Marcia Dickstein’s harp grounded the Debussy (and Saint-Saens) with her solid technique and gentle touch.  Her influence elevated the performance to a level rarely experienced.  The Interlude found Dickstein energized, and Vliek and Brophy were effervescent in the wispy flourishes.  At other instances, it was amazing how much music could be created with the plainest of sustained pitches.  Dickstein’s harp purred as she pushed the Finale along, and Vliek delivered a high-energy splash of her own to propel us toward the conclusion.

Saint-Saens’ Fantasie in A for Violin and Harp, opus 124, was distinctly different from the less-staid Impressionists on the program.  Searmi Park was particularly assertive in her approach, and she engaged the attention of the audience from the very start.  Her instrument sang so beautifully at times, and her expressive, almost rapturous, manner brought out unique timbres and envelopes that she still managed to precisely control.  The delicate flowing lines of the Largamente were clean and exact, although still fluid.  Her melodies were warm and engaging, and the emphatic musical climax of the Andante loosened the rhythm of my breathing.  Her delicate pianissimo harmonics that followed were deftly sweet.

The tempo of the event itself was nice.  The one-hour concert, without intermission, was followed by an informal champagne chat between the audience and musicians.  The range of questions was intriguing and really provided insight into the motivations and practices of the artists.

Bravo to the producers and artists of Le Salon de Musiques!  Très LA!

The sophistication of music and ambiance combined exquisitely with LA’s finest artists for a truly unique event and an important addition to the local chamber music scene.

Two concerts remain in the series this spring.  Phillip Levy will perform on Schubert’s String Trio in B-flat Major and Mozart’s String Quintet in G Minor scheduled for April 10, and Chouchan will join the final installment of the series on May 15 with Mozart’s Sonata in D Major and Rachmaninoff’s Fantasy-Tableaux, both for two pianos.