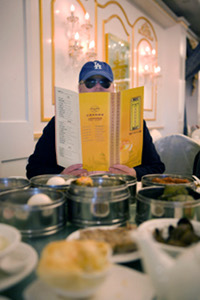 Gold’s witty introduction described the obvious synesthesia between taste and sound, and the anecdotes from his professional history as both music and food critic gave unique insight into the program.  We ingest both food and sound into the body, so it is natural to describe them in similar language.  He talked of contrapuntal flavors and textures, the juxtaposition of consonance and dissonance, and the importance of timing in the crescendo of a meal.

Soprano Elissa Johnston was delightful as she opened the concert with three food-themed songs.  Bach’s Ich esse mit Freuden (I eat with joy) from Cantata No. 84 was presented almost as an aperitif, with violinist Margaret Batjer, cellist Armen Ksajikian, oboist Allan Vogel, and organist Patricia Mabee.  Ksajikian was outstanding; his continuo kept the ensemble lightly floating along in a sumptuous testament to the joy of good food.

Leonard Bernstein’s La Bonne Cuisine – Four Recipes for Voice and Piano, literally includes recipes from Madame Saint-Ange’s 1927 cookbook.  Johnston wore a striped kitchen apron as she sang these historic recipes.  Plum Pudding included unctuous references to “Spry” and “Crisco” and “half a glass of Bacardi,” and in Queues de Bœuf she asked, “Are you too proud to serve your friends an oxtail stew?”

Timothy Andres’ Sorbet provided a nice ending to the “meal” and cleansed our tonal palates for the musical substance of the program.  I had never heard a sorbet before, but this solo piano dessert did possess a certain coolness. There was a descending three-note figure that never relented and definitely was not pastel in its shading.  Andres’ playing was deliberate and segmental.  Hints of sweetness, creaminess, or fruitiness did not come to my gastronomic mind, but Andres’ music was indeed compelling with what I perceived as muddled undertones of Bartók, somewhat citric and laced with an anisette – very tasty. I wanted a second serving.

After the musical victuals, the audience delighted in Gold’s reading of his famous essay on gourmet SPAM.  In the hands of a creative master, even canned meat, like oxtail stew, can rise to the level of art.

The mainstay of the event was Ernst von Dohnányi’s (1934) Sextet Op. 37.  The ensemble played in a grand style and had a more potent sound than one expected from its six parts.  The influence of Brahms in the syrupy, lyric melodic lines was obvious, and jazzy sprinkles gave hints of the zeitgeist of the era.

Violinist Sarah Thornblade, violist Robert Brophy, and cellist Armen Ksajikian sounded like a small orchestral section.  The ebony sound of Joshua Ranzand’s clarinet and David Everson’s effulgent cornu radiated Dohnányi’s beautiful melodies throughout the room.  Pianist and LACO Music Director Jeffrey Kahane was marvelous at binding the elements together.  The ensemble was sulfuric at times, and Dohnányi’s astringent sweetness gave way to the not-so-subtle heat of the vivace.

Bravo to curator Margaret Batjer and Westside Connections on another great theme this season!  Gold lamented that there was no such instrument as a “food organ,” but now we can surely dream of how it might taste and sound.