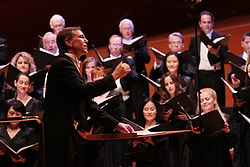 The Los Angeles Master Chorale opened its 2011-2012 season to a full house at Walt Disney Concert Hall on Oct. 16 with Grant Gershon and Leslie Leighton sharing the podium in a program that featured some of their all-time best music and close friends.  The headline work, Lux Aeterna, by Morten Lauridsen has become a staple of the Choral repertoire since its LAMC premiere in 1997.  Lauridsen was present for the concert and received a warm and enthusiastic reception after the magnificent performance.

Lux Aeterna was the cornerstone of the event, but several of the smaller works were outstanding.  The program was personal in ethos and eclectic in style, and made for a marvelous celebration.

Swedish composer Thomas Jennefelt’s Music for a big church; for tranquility was a U.S. premiere.  The continuous phrases and sustained voices were layered in an exquisite effect that produced a delicate gong-like sound.  Flourishes would rise and fall as if breathing. The inharmonic complex timbres were perfectly in pitch. The singers were magnificent in their ability to produce emotionally loaded pianissimos, and certainly the acoustical bliss of their Disney Hall home allowed the effect to really come to life.  Jennefelt’s “text” was totally nonverbal yet communicative.  Jennefelt created affect without the meaning of words to mediate it.  The effect was powerful, human voices sang a phonetic “text” that gave rise to emotion without lexical or semantic components to define it.  The sibilant shimmer was a language unto itself, occasionally prosodic, always organic and engaging.  I thought it was brilliant in inception, and the concept was certainly realized in this performance.

Her Sacred Spirit Soars by Eric Whitacre grouped the 115 singers into two choirs of five voices each.  The Chorale was powerful in its portrayal of Whitacre’s modern manners and harmonies.  At times Gershon would roll his hands perpendicular to his body to create a rolling motion in the sound, and his largesse billowed in the voices.  The ending was grand and left us in a high.

Associate Conductor Leslie Leighton took the podium to lead Tal vez tenemos tiempo (Maybe we have time) by London-based composer Tarik O’Regan.  Leighton’s capable direction highlighted yet another aspect of the Chorale’s capabilities and personality.  The style was homophonic and expressionist in its overt emotionality around “solidarity and suffering.”  Her expressive direction implied an object or substance in a plane immediately in front of her, as if she were a sculptor of sorts.  Occasionally she would extend her arm and pull voices from the choir and add them to her vision.  Her face gave tell to the soul of the music, and the Chorale responded with its powerful abilities.

Heavenly Home, arranged by LAMC tenor Shawn Kirchner, was well received and a nice complement to the pre-intermission program. The triptych, including Unclouded Day, Angel Band, and Halleluja, added a traditional moment to the overall modern program. Kirchner knows well the strong points of the LAMC and in his arrangements showcased those aspects in a wonderful piece of Americana in a Gospel style.  The sound was spirited and lively.  The crowd was happy.

The post-intermission program was a homecoming for Lauridsen’s now widely performed Lux Aeterna.  Gershon reorganized the choir for each piece, and in this performance the voices were mixed to produce a totally homogeneous, unlocalized wall of sound.  The swells of energy were substantive in their effect.  Organist Paul Meier was magnificent, and the house organ reached into the resonant depths of the Hall.  There was a musical dialogue between the choir and Meier, and his control of the instrument produced rarely heard effects.  Gershon’s hands often portrayed a viscous medium, and his huge dynamic shifts were passionate, leaving the Agnus Dei astounding in its strength and affect.  His dramatic extended “ppp” final cadence left us stilled.

Bravo!  The Master Chorale and Grant Gershon demonstrated unequivocally why they have risen to their rank as one of America’s finest choirs – a significant accomplishment and testament to the quality and heart of our Los Angeles Master Chorale.