Music Review: Mehta and the IPO 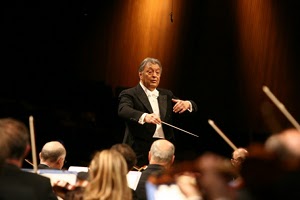 On Tuesday night, the Israel Philharmonic Orchestra (IPO) and its music director for life, Zubin Mehta, returned to Disney Hall to perform works by Haydn and Mahler. The concert and gala celebrated the 75th anniversary season of the IPO and the 50th anniversary of Mehta’s conducting debut.

Los Angeles is the perfect place for the IPO to host a gala and perform a concert celebrating these milestones not only because the city’s Jewish population is second only to the country of Israel, but also because LA is the adopted home of the previous music director of the LA Phil and favorite son, Mehta.

Maestro Mehta strode slowly onstage to the cheers and applause of a packed Disney Hall and opened the concert with the national anthems of the United States and Israel. One could hear the audience singing along with both anthems.

After the Israeli national anthem, Mehta then walked off stage while the orchestra downsized in preparation for the Haydn Symphony No. 96 in D major, Hob.1/96, “Miracle.” The symphony is so-called because presumably during its first performance in London (although not numbered as such, it was technically the first of Haydn’s London symphonies) a chandelier fell from the ceiling barely missing concertgoers.

Mehta led the IPO in a spirited performance of the Haydn, making the orchestra sound larger than its size. With the reduced number of strings, it would have been easy to allow the horns, trumpets or tympani to over reach, especially in the acoustically sensitive Disney Hall. But Mehta maintained a perfect balance while essentially letting the orchestra play with very little direction from him. Instead of sweeping directorial movements, at times he only glanced at individual members to cue their entrance. Although the orchestra played flawlessly, particular kudos go to the principal oboist for his wonderful solo playing in the third movement.

After intermission the entire orchestra returned to perform the Symphony No. 5 in C-sharp minor (although three of the movements are in a major key) by Gustav Mahler. This particular symphony, with its first two movements marked Trauermarsch (Funeral march) and Stürmisch bewegt, mit größter Vehemenz (In stormy motion with the greatest vehemence), in two minor keys (C-sharp minor and A minor) seemed a perfect fit with the inherently melancholy Israeli national anthem. The visible security guards floating around Disney Hall reminded one of the persecution faced by Jews historically, although it is now more often reserved for the state of Israel.

As for the performance itself, it was moving and riveting and kept the audience mostly attentive for its 70-minute duration. Mehta’s actions on the podium belied his age and demonstrated a master conductor at one with the ensemble he has conducted for the past 50 years. Although all members and sections of the orchestra were outstanding, none was more so than Principal Hornist James Madison Cox. The tone and power of his playing were so impressive that Maestro Mehta asked him to stand immediately after the rousing finale.

The orchestra and its music director did their country and people proud with this 75th anniversary concert.