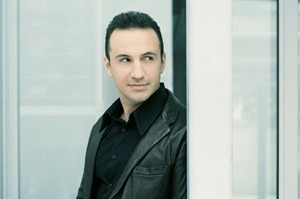 On Tuesday night, Trpčeski returned to Disney Hall for a solo recital of works by Haydn, Chopin, Prokofiev and Macedonian composer Pande Shahov.

Trpčeski opened the recital with a hauntingly beautiful and almost ethereal rendition of the Haydn Piano Sonata in C minor Hob XVI/20 that kept the audience so spellbound, one could have literally heard a pin drop. Trpčeski caressed the keys as a lover would his beloved, sometimes so delicately that it was difficult to believe that any sound could come out. In fact, it’s hard to imagine how this sonata could have been performed more perfectly. Trpčeski’s performance made the Haydn sonata sound more like a Beethoven sonata. Of course, Haydn also helped a bit with this particular sonata, definitive of his Sturm und Drang (storm and stress) period, with its changing dynamics and minor key.

In introducing the Shahov, which received its California premiere, Trpčeski explained its origin: he asked his friend to compose a piece using Macedonian folks songs and commemorating the 200th anniversary of Chopin’s birth. Trpčeski then asked the audience if they would allow him to sing the folk songs briefly so they would be more easily recognized when they appeared in the piece. His informality on stage was a welcomed relief from the almost stilted formality often seen from soloists. Not surprisingly, Trpčeski performed the classical- and jazz-inspired Shahov with the exhilaration and feeling that only a landsman could.

Trpčeski concluded the recital with Prokofiev’s most popular piano sonata, the No. 7 in B-flat major, Op. 83. After taking a bow for the Shahov, he immediately launched into the first movement of the Prokofiev — Allegreo inquieto (fast and restless or uneasy) — and took the audience on a wild rhythmic ride, with a brief respite for the second movement — Andante caloroso (with warmth) — and then a thunderous romp through the third movement — Precipitato (hurried) — which, as usual, brought the audience to their feet.

It is clear that Trpčeski loves playing the piano and performing, because it didn’t take much coaxing for him to perform two short encores, Variation 6 from the Variations on a Minuet by J.P. Duport, by Mozart, and the Waltz in A Minor by Chopin, which he dedicated to his father.

The Disney Hall staff, perhaps predicting that Trpčeski would not sell out the hall (after all, he is not yet a household name), did not sell seats in the Orchestra View (behind the orchestra) or Terrace East and West sections of the hall. This made for a much more intimate recital experience.

But, although Trpčeski is not yet a household name, he likely will be. His playing ranges effortlessly between the most subtle and the most vibrant, and his repertoire is broad. That coupled with his easygoing and genuine demeanor on stage will only increase his name recognition among lovers of piano music.

I predict that next time he plays Disney Hall, seats in every section will have to be opened up.