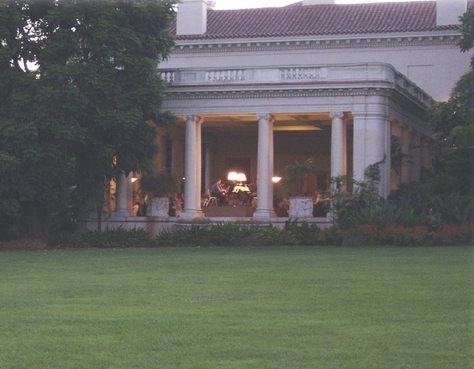 Bravo for a bold piece of programming!  Southwest Chamber Music opened its four-program Summer Festival outdoors on the art gallery loggia at the Huntington Library, Art Collections and Botanical Gardens July 9 and 10 with a fantastic first installment on its unique promise of delivering the complete body of Mozart string quintets.  Hearing these magnificent compositions was a rare treat, and the performance was sublime.

Each of the programs also features a modern composer. This first event featured a favorite of mine, Alexandra du Bois, resident composer with SWC throughout its recent Ascending Dragon Tour.  Her works have been performed by the Kronos Quartet, the Beaux Arts Trio, as well as Southwest Chamber Music.  Du Bois’ violin duo was performed between the Mozart quintets – no small challenge – but her work stood solidly on its own, and Lorenz Gamma and Shalini Vijayan interpreted her work in a powerful performance.

Chanson d’orage, originally composed for the 2009 Savannah Music Festival, translates as “Storm of Song,” and du Bois describes her work as a portrayal of the “weather of the heart.”  Gamma and Vijayan beautifully spun the tightly intertwined lines of her flowing soundscape into a stream of emotions that pulsed with a natural rhythm and energy.  A seamless entanglement evolved as they alternated figure and ground, at times warm and melting, and at others churning, all the while remaining unabashedly directed and intentional.  Du Bois’ music is easy to listen to, with an evocative lyricism and a subtle complexity that grips the ear with its natural intensity.  I sensed the influence of Messiaen, and perhaps Boulez, but she was unique in her own voice, one that I am certain to remember.

Gamma and Vijayan read from a single manuscript spread widely across four contiguous stands.  They inched their way across the stage as they performed, and their physical interactions, gestures, and manners followed the sound.  The changing localization actually added to the overall perception.

The contrast between Mozart’s first and second string quintets speaks to his brilliance and creativity.  The String Quintet in B flat major, K. 174, was written when he was 17 years old, and the String Quintet No.2 in C minor, K. 515, was derived from a Serenade written originally for winds.

The extra viola part gave Jan Karlin a central role in the ensemble, one that she truly deserves.  Gamma and Karlin were immediately engaging and lively from the opening melody.  Peter Jacobson’s cello grounded the group with finesse, and his solo passages were among the best; he has a wonderful timbre and manner that really shaped the ensemble’s interpretation of Mozart.  Gamma can coax a huge sound from his instrument as well, so whenever the two of them were paired, the sound was exquisite.  Vijayan and Gamma had somewhat different tonal qualities; her sweet sound was wonderful in the expressive Adagio of No. 1, and the interplay between them was always balanced and consistent with Gamma’s lead.

Gamma led the ensemble with a driving intensity, especially in Quintet No. 2, taking full advantage of the chromaticism, severe dynamics, and irregular phrasing.  He pressed an overt exuberance throughout.  The melodic figures of the Allegretto hinted of the wind score on which this quintet was based, and the group effectively brought the Serenade quality to life.  I found myself gently swaying in my seat several times.  I enjoyed the drama level too.  Vijayan led the way through an inspired double canon, and each player had moments of virtuosity, including violist Luke Maurer.  In the closing Allegro, Mozart stretched his themes to the point of abstraction, and Gamma again was superb, pushing the envelope “just enough.”  The ensemble sparkled with this brilliant end to the evening.  The triple-call applause was well deserved.  The performance was inspired.

These summer concerts, in their 19th year, are among the finest to be found in Los Angeles, or anywhere for that matter.  Whether you picnic on the lawn, or join the ensemble on the loggia, the music is simply delicious, and the concept this year is a solid home run!

Here are the remaining concerts: