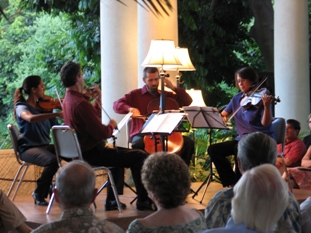 Each year I look forward to Southwest Chamber Music’s Summer Festival at the Huntington. To enjoy the beauty of the grounds, the art, and exquisite chamber music in the cool of a summer evening is a cultural experience unrivaled in Southern California.

Carl Friedrich Abel’s String Quartet in B flat major, Op. 8, No. 2, launched the program with elegant energy. Before intermission Jeff von der Schmidt commented on the significance of the composer, who collaborated with Johann Christian Bach to create a long-running concert series in London. The composer is also tied to the Huntington collection: his portrait is displayed in the same hall as the famous Blue Boy of Thomas Gainsborough. Those of us who made our way to the art gallery during intermission were treated to a lecture on the interconnections of the portraits displayed there.

Davis joined the quartet for the closing set of the first half: Phantasy Quartet for Oboe and Strings by Benjamin Britten and Cantilena for Oboe & Strings by Thea Musgrave. Apparently, Britten is also tied to the Huntington, as his correspondence with other artists of his day is part of the collection. The Phantasy reminded me of Stravinsky’s L’Histoire du Soldat, opening and closing with an energetic march to usher the protagonist oboe on and off stage.  The lyrical Cantilena by Musgrave was a U.S. premiere of the piece. A dialogue between the quartet and the oboe opens the work, until the oboe accepts the invitation and literally joins the quartet on stage. After building to an exciting climax, the piece closes with a peaceful coda.

Two works for string quartet concluded the program: Danzas de Panama by William Grant Still, and Dvorák’s String Quartet in F major, Op. 96, American. It was an interesting pairing, to hear a piece by the American composer Still that incorporates melodies from Panama juxtaposed with the Czech composer’s perceptions of the United States. Still’s piece resonated with sun-drenched color, lively dance rhythms, and the percussive sounds of native instruments.

Dvorák wrote this closing Quartet during his stay in the States. The opening movement is infused with the atmosphere of his walks in the countryside. The second movement, Lento, was achingly beautiful, showcasing the impassioned cello playing of Jacobson in the closing statement of the theme. The composer marveled at the different sounds of American birds during his strolls in the country, and he incorporated their songs in the Molto vivace movement. The closing Vivace ma non troppo reminded me of the New World Symphony, with lilting rhythms and a lyricism that assimilates American folksong.

I encourage you to treat yourself to the remaining concerts of the Summer Festival. There are three concerts remaining in the series, and you can choose Saturday or Sunday evenings. For more information, visit www.swmusic.org.