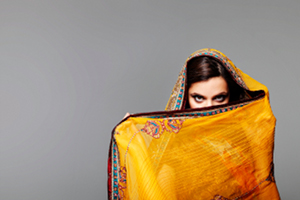 The best entertainments take you places — places where you likely have never been — and offer you a grandstand seat to explore that world. “Burq Off!,” a one-woman show by Nadia Parvez Manzoor, would certainly qualify for most Americans. It receives its West Coast premiere in Los Angeles (July 17-19) at the Elephant Stages in Hollywood and San Francisco (July 24-26) at the EXIT Theatre Studio Space.

Demonstrating considerable skills in mime and impressions — as well as an agile physicality — Manzoor gives a bravura performance that offers viewers a unique and compelling insight into what it’s like for a beautiful, free-spirited girl — herself — to come of age in a traditional Pakistani family in North London.

The set is simple, but effective: a table, three chairs and background panels overlaid with colorful scarves, a few of which Manzoor uses as various types of Muslim dress or headscarves (and in one instance, a “burqini” — more on that later). The play opens with Manzoor playing herself as a young girl, and we are immediately given to understand that little Nadia is the proverbial square peg that will not fit in the round hole.

While she does dead-on impressions of her English friends and their stuffy parents, the characters she inhabits most are her stern father, her kind mother and her sour, peevish twin brother. In some scenes, she leaps back and forth between these characters with impressive agility in a rapid-fire round robin. She has drawn them well — we are never confused about who is speaking, even when navigating among the numerous unfamiliar Urdu terms she mixes in.

As Nadia progresses into her teen years, we see the unrelenting pressure to conform to her cultural norms — sometimes resulting in physical violence when she transgresses. However, Director Tara Elliot has chosen to keep the overall tone light and mostly humorous, especially via excerpts in which we get to see Manzoor’s remarkable facility with dance and movement. She stages a hilarious spot-on Bollywood dance number, as well as some hip-hop and popping, suggesting the rich masala of cultures present in her neighborhood.

The most compelling parts come in the latter half when Nadia goes away to college and finds her first (non-Muslim) boyfriend, whom she has to hide from her family. She clearly is moving away from her traditional Pakistani culture, while at the same time her brother is becoming more and more radicalized. On the lighter side, we learn what a “burqini” looks like when Nadia tries to find something appropriate to wear to the beach (she can do magic with those scarves!); and on a serious note, we feel the collision between duty and desire when her family exhorts her to move back home after her mother becomes gravely ill.

Manzoor steps out of her characters from time to time to provide commentary or background info about subjects like Islamic honor killing or cousin marriage. Her “real self,” with her upper-class British accent and modern ideas, reveals no trace of her ethnic background and signals just how far she has come in her desire to become more anglicized. Those in her family who insist that Nadia conform keep telling her, “This is OUR culture,” but it is apparent from her story and particularly from her asides that she has chosen to define for herself what her culture is or can be.

The struggle to find oneself in the clash of cultures is a powerful theme, never more relevant than in today’s multicultural world. Manzoor may have shrugged off the burqa, both literally and figuratively, but she also reveals that doing so can come at a heavy emotional cost. And that tension is what enriches the core of this excellent performance.

San Francisco performances will run from Thursday, July 24, through Saturday, July 26, at the EXIT Theatre Studio Space, 156 Eddy St., San Francisco 94102 (http://www.theexit.org; 415-931-1094). Performances start at 8 p.m. For information, please visit http://nadiapmanzoor.com. Tickets are $15 in advance, $20 at the door and can be purchased online here. View a trailer here.