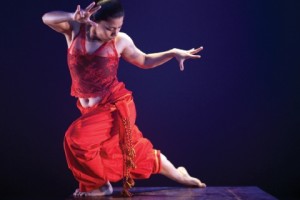 Indonesian choreographer Ery Mefri does not speak English. His company Nan Jombang is in New York City the week before coming to Los Angeles, busily performing at Fall for Dance and at Asia Society. Both circumstances slim my chances of an interview. Fortunately, company manager Suzanne La is happy to answer my questions — and provide me with several of Mefri’s own reflections via email —  about his West Coast premiere of “Rantau Berbisik (Whisperings of Exile)” at REDCAT this Wednesday through Sunday (with the exception of Friday).

Mefri is a part of West Sumatra’s Minangkabau ethnic minority. He is very deliberate in exploring issues facing his society, like the ambivalence toward migration, or merantau, the traditional departure of young men from villages to establish themselves economically elsewhere. The guys often land in major Indonesian cities where Minangkabau cafes are popular. Around 80 percent of the men who leave Minangkabau villages never return. Mefri is an oddball. He was born in Solok and chose to settle in nearby Padang. But the nostalgia, longing, resentment, and loss this outmigration sparks remain on Mefri’s mind, and inspired this work.

“When people don’t come back, it hurts development and our ability to progress in West Sumatra,” Mefri says. “There is a lot of depth to our feelings about this, and a lot going on that’s very powerful for many people, outside of the Minangkabau community and Indonesia. What are our obligations to our own community? This is a question we all face.”

Mefri credits traditional Sumatran culture with influencing his love of dance, but most important, his father. Though his father was not a choreographer, he was well versed in traditional dance and martial arts. Mefri grew up watching and learning how to dance. It was only natural that Mefri continued to grow his long lineage of artisans by including his entire family in Nan Jombang. He is the founder and artistic director; his wife Angga Mefri is the manager; his children Rio, Geby, Intan, and Ririn are all key dancers. There are 17 dancers total in the company, not including the younger children who take classes at their community dance studio in Padang.

“I come out of tradition. Both of my parents were traditional dancers, and I grew up with that in my body and soul,” says Mefri. “Tradition is not something that’s simply stuck and never moves forward. Contemporary dance and our traditions are in fact quite close, which makes Nan Jombang’s work a really creative endeavor and strongly a part of who we are.”

The literal translation of Nan Jombang is “a thing of beauty.” It was the title of Mefri’s first choreographic work in 1983, and then became the name of his company. Mefri pulls from a variety of styles for “Rantau Berbisik”: spiritual and martial arts traditions of West Sumatra Minangkabau society, as well as Western-influenced movement and body percussion traditions. More specifically, the dancers perform Tari Piring, the swirling, driving plate dance originating from Solok once done at harvest. Suzanne La explains that the dancers chant, pound, stomp, and clap. Haunting female voices contrast with bold, acrobatic statements. Contemporary movement meshes with layers of gesture and suggestions of ritual.

Mefri also incorporates Pencak Silat, or Indonesian martial arts, and Randai, folk theater with dance, music, and storytelling, into his piece. Historically, men and boys have performed Randai in open plazas or pavilions, but as La points out, Mefri has taken the art form onto the global stage and broadened the scope of folk theater’s sound and movement. She says the company follows in the footsteps of groundbreaking Minangkabau dancers, who began decades ago to put traditional rituals, theatrical pieces, and martial arts movements into contemporary contexts. Instead of restaging and reframing traditional pieces, however, Nan Jombang features traditional elements in new ways and contexts to express contemporary ideas, emotions, and dynamics.

“We are not imitating traditional forms,” says Mefri. “We’re allowing them to inform us and give us a deeper vocabulary. It’s like our Minangkabau forms of Pencak Silat. They are named for tigers and birds, but it’s more about character studies. It’s taking out the character or soul of that movement and giving it a kind of dynamic spirit.”

Nan Jombang dancers rehearse six hours a day, but Mefri encourages them to be conscious of their every movement, because everything from yawning to stretching and cooking to taking a shower can be a dance.

For Mefri, a huge learning experience came along in 1994 while he was taking workshops at American Dance Festival in North Carolina. Because of the language barrier, he found alternative ways to communicate with the other dancers. He began to develop movements that incorporated aspects from his immediate environment, sounds made from the body, clothing, and found objects. Mefri uses minimal music in his pieces because he believes that no one can give voice to anyone else’s pain.

Nan Jombang’s Los Angeles stop is part of its 2012 Center Stage tour, the first time the company as a whole has appeared in the United States. Mefri is very grateful to sources outside of Indonesia for funding because, as La explains, the Indonesian government does not give much support to artists.

After Sunday’s performance, Nan Jombang has one more commitment: a weeklong engagement in Jakarta. Then, after many months on the road, the company looks forward to getting back to their dance studio in Padang — and returning home.