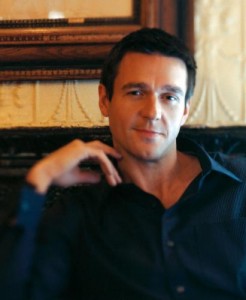 Nathan Gunn, an award-winning baritone who was included in People magazine’s 2008 list of sexiest men alive, is onstage at the Dorothy Chandler Pavilion through Dec. 19 as Figaro, the title role in LA Opera’s “The Barber of Seville.” The Rossini opera features some instantly recognizable music (“Thanks to Warner Brothers,” Gunn said with a laugh, referring to Looney Tunes cartoons.). “This production, for anybody who has never seen an opera, is a great first opera, because it’s fun,” Gunn said. “There are lots of funny, goofy things going on. And honestly, you’re not going to hear a better cast.”

This week Gunn sang the National Anthem at a Lakers basketball game and enjoyed VIP treatment with courtside seats. He was scheduled to open an LA Kings hockey game too. “I’m loving being in LA,” he said.

Gunn will also perform a recital, accompanied by his wife Julie, at the Broad Stage on Friday, Dec. 11. The diverse program will feature arias from “The Magic Flute” (Gunn played Papageno in LA Opera’s production this year), songs by Franz Schubert, popular music by the likes of Tom Waits, Christmas songs and selections from musical theater.

Culture Spot LA: Having played Figaro several times (the first time in 1996 with the St. Louis Opera), what do you enjoy about the role?
Nathan Gunn: If you knew me personally, I’m a pretty quiet, kind of private person – as many of my colleagues are – and we tend to be reluctant artists in a lot of ways and end up coming into this kind of art form – a lot of us – because we love music and drama, but we’re not very histrionic – some of us aren’t, I’m not – and the thing about Figaro is it’s kind of interesting for me to play a character that’s so gregarious and interested in intrigue and enjoys manipulating. He’s kind of a mentalist, he likes to think about how somebody’s going to react to something and then plan five or six moves ahead to get a desired result, and it doesn’t always work out, he’s not perfect at it, so all sorts of funny situations occur.

CS: Is it more satisfying to do comic operas or dramatic ones?
NG: I think they’re both satisfying, but comedy is really hard though. It’s easy to die and hard to make people laugh. I don’t know why that is, but I take that as a rule. … One thing I hate, which is probably good for me in this business, is the obligatory opera laugh that people have to the same old joke. I try to mix it up a lot and add a little bit of my own personal goofiness and hope and pray that people get the humor. I try not to be funny, but I create funny situations. … There’s this really funny bit where Bartolo comes out with his dog and, for whatever reason, walking up to the front of the stage I thought, well, this is Spain, right? And they never curb their dogs. So it would make sense that I would step in some dog poo. [Laughs] People think it’s hilarious, but I thought of it two seconds before I did it. You can play a little more when it’s a comedy. 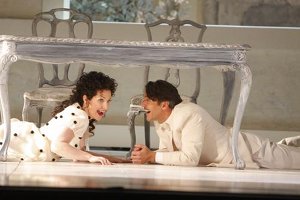 Nathan Gunn as Figaro, with Joyce DiDonato as Rosina, in LA Opera's "The Barber of Seville" / photo by Robert Millard

CS: Having performed in opera houses around the world, including the Met and Paris Opera, how does LA Opera compare?
NG: They are right up there. … They’re relatively young and have been continually growing. They’re good to their young artists. The orchestra plays beautifully. They do some very adventurous pieces at times, and that’s something I really like, that it’s not always the standard rep. They try some new productions every once in a while, and that’s a good thing. The opera form needs to stay alive and well.

CS: You have a reputation for creating new roles for world premiere operas (like Alec Harvey in André Previn’s “Brief Encounter” at the Houston Grand Opera and Father Delura in Peter Eötvös’ “Love and Other Demons” at the 2008 Glyndebourne Opera Festival).
NG: I like doing that. It’s important to me. I wish all of my colleagues felt the same way. … I think it’s almost obligatory that we participate in these new productions, at least one a year or every two years. … There are a lot of great composers out there and it takes a ton of money, and time, to get a new piece written and staged and ready for performance in an important opera house, and it should have the best singers they can find too.

CS: Your album “Just Before Sunrise” (which features music by Tom Waits, Billy Joel and Sting) and recent forays into musical theater (semi-staged performances of “Camelot” with the New York Philharmonic and “Showboat” at Carnegie Hall) led me to wonder how you decided to pursue opera rather than follow another musical path?
NG: It oddly sort of pursued me. In high school it was being introduced to opera through recordings and being asked to participate in opera workshops at Indiana University in South Bend, where I grew up, that made me think, well, maybe I want to study music. And singing was something I had been asked to do a lot; I was asked to audition for musicals at school and sing solos at church because I had a pretty voice as a boy, and as I got older it kind of stayed that way. It was really the music that grabbed my attention more than anything else. So I decided on a whim to audition for music schools and I got into all of them. That made me think, well, maybe there’s a future in this for me.
[Gunn went on to graduate from the University of Illinois at Champaign-Urbana, where he is now a professor of voice. He was also in the Metropolitan Opera Lindemann Young Artists Program and won the 1994 Metropolitan Opera National Council Competition.]

CS: People magazine named you one of 2008’s sexiest men alive. Stephen Colbert called you a super-sexy opera star. What is your reaction to all that?
NG: I think it’s flattering. [laughs] I didn’t do anything to deserve it. [laughs] It’s just one of those funny things. You know, whatever helps the industry. For some reason, if [Russian soprano] Anna Netrebko being a beautiful woman brings a guy into the theater to see an art form that he eventually will come to love, then that’s great. If it’s me who’s doing that, well terrific. My focus is primarily on trying to sing as well as I can and trying to be a good influence for younger singers. I suppose music is the way I communicate best with people. … When you’re in the theater with 2,000 people and they’ve just come from work and they have to go to work tomorrow, and they’re driving their car, it’s busy and there’s traffic and horns, and they’re staring at a computer screen all day – what I try to do is create an environment where they can really focus and escape this crazy, impersonal – in a lot of ways – world and have a real communal experience.

CS: Do you think young, attractive opera singers are helping attract younger audiences?
NG: I think that’s beginning to happen. The biggest impediment that I see now isn’t so much musical; the modern ears can absorb and endure in some ways a wide palette of sounds. … For young people who listen to a wide variety of things, that’s not really the issue. I think the three biggest challenges to getting people into the theater are one, cost, … two, making them feel comfortable, … and the other is just simply the name opera. Opera is a word that brings with it so many connotations, when it really just means “work,” “a work.” But we think horns and big, fat singers, and loud. If there were more words for it – like the music you hear on the radio – opera would range from reggae to country or new age. There’s such a huge variety that falls under the line of opera. Rossini sounds so different than Wagner who sounds so different than … Mozart or Verdi. The word opera is loaded, and if we could just call it something else. We can’t call it musical theater – which it is – because then you’re thinking of “Oklahoma.”

CS: You’ve been shirtless as Figaro before (though not in this production), and The New York Times had said that stage directors search for any excuse to make your character bare-chested.
NG: [Laughs] Oh, I don’t think that’s true. [laughs] There’s a couple that maybe do that. … I think with all honesty I can say that every opera where I’ve been at least seminude [laughs], it was for a reason: a love scene or getting bathed. … In “Love and Other Demons,” a new production I did at Glyndebourne, the character I was playing was a priest who was flagellating himself because he was in love – or lust at least – with a girl – in the book she was 12 and in this she’s more like 14. So there was a mix of love scene slash flagellation scene. They had all these pre-filmed things where I’m laying on the ground and getting blood dumped over me. Then on the actual stage I’m whipping myself on my back. It made sense with what I was singing about. But what the director didn’t know was that just because of the publicity I’ve gotten, that was something that was brought up in the press. He didn’t realize that if you’re going to take Nathan’s clothes off at all, someone’s going to mention it.

Read the Culture Spot review of “The Barber of Seville.”