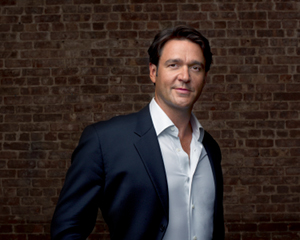 Last year, acclaimed operatic baritone Nathan Gunn made his debut at Orange County’s Segerstrom Center for the Arts. This year he’s making another Southern California debut — at the Valley Performing Arts Center at California State University Northridge, where he’ll perform a concert of romantic duets from the Broadway stage with Kelli O’Hara on Monday, Oct. 22, at 8 p.m.

Between his musical theater concerts, his operatic roles at the world’s top opera houses and the newly released Christmas CD/DVD with the Mormon Tabernacle Choir, Gunn is a very busy man. And it’s no surprise that he is in demand. Gunn is a Grammy Award-winning artist who was praised by Opera News as a “singer with unmistakable star power” — and it doesn’t hurt that he’s one of People magazine’s sexiest men alive.

Next week’s concert brings together Gunn and O’Hara, the Tony Award-nominated singer whom The New York Times called “the most accomplished Broadway ingénue to emerge in years,” in a concert created and conducted by Tony Award winner Ted Sperling. The concert, which kicks off the Valley Performing Arts Center’s Broadway and American song series, will feature highlights from Carousel, Show Boat, Kiss Me Kate, West Side Story and other Broadway classics.

His upcoming operatic appearances include Rossini’s Le Comte Ory at the Metropolitan Opera in January. Known for taking on new roles as well, Gunn is slated to appear in the world premiere of Mark Adamo’s The Gospel of Mary Magdalene at the San Francisco Opera in June.

Gunn’s latest recording, Once Upon a Christmas, features the Mormon Tabernacle Choir’s 2011 Christmas concert from Temple Square with Jane Seymour narrating “Good King Wenceslas.” It is available on Amazon and iTunes; plus, PBS will broadcast the concert on Sunday, Dec. 6, and Friday, Dec. 21, as well as Christmas Eve and Christmas Day.

We asked the busy baritone a few questions about his Northridge concert and San Francisco opera role, as well as the other love of his life — his five kids.

Culture Spot LA: What do you feel makes this concert of romantic duets from the Broadway stage with Kelli O’Hara particularly enjoyable for audiences?

Nathan Gunn: Kelli is such a beautiful singer, not just in vocal beauty but also in spirit. She really is, in some ways, a throwback to the golden age of Broadway. The audiences are going to see and hear Broadway classics sung like they used to be sung: full-throated.

CS: How important is chemistry in these kinds of performances? How did you build chemistry with Kelli O’Hara after only two performances together?

NG: Some people communicate easily together. Kelli and I have from the beginning spoken the same musical language and have personally gotten along. She is a beautiful person on the inside and outside. She trusts her fellow actors as well as the audience and gives all she has. This is the way I like to work as well.

CS: Can you tell us what it is like to collaborate with Tony Award-winning conductor Ted Sperling?

NG: Ted is great to work with because he takes care of us when we are on stage. This is something that is very important for singers. He is what we call a singer-friendly conductor.

CS: What do you enjoy most about singing these Broadway tunes?

NG: I love singing Broadway tunes because it’s the music I grew up listening to around the house. It’s the music my mother would be playing. It just so happens that most of the leads in classical Broadway shows are baritones like myself. That doesn’t hurt.

CS: What do your children think of your concerts, operas and the Christmas CD?

NG: My kids love it! They are so used to their dad doing this that for them it’s sort of normal. I suppose they are secretly proud of me — maybe even think it’s cool.

CS: What are you looking forward to most about San Francisco Opera’s world premiere of The Gospel of Mary Magdalene?

NG: This will be the first time I’ll be singing Mark Adamo’s music, and I’m very much looking forward to it. He writes beautiful lines that singers love. Also, the subject matter is intriguing to me. I like looking at the gospel story from a different point of view. This story is very much the story of a man — how he might have been perceived at the time by others without the help of the canonic gospels.

CS: Was there something I didn’t ask that you wish I had?