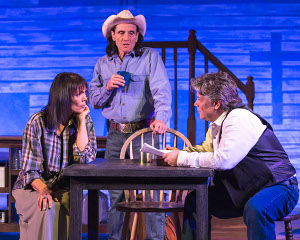 Playwright Diane Glancy’s “The Bird House” offers the plight of Rev. Jonathan Logan — affably played by Randy Reinholz — and his woebegone family.  Directed by Robert Caisley, it gets its world premiere at Native Voices at the Autry and runs through March 17.

Jonathan “Hawk” Logan is a man at the end of his rope, but he doesn’t accept this fact even when he’s dangling over the precipice. The preacher of a dwindling congregation in a drought-plagued west Texas town, Logan works hard to convince himself and others that he would have had 20 people at last Sunday’s service if yet another family had not moved out of town.

Like the town of Ropesville, Logan’s life has been diminishing for years, but not his faith in God. Left with a fractious family and the financial burden of providing for his two sisters, Logan is willing to suffer the physical discomfort of living on the church’s balcony and sleeping on pews if that is what it takes to keep his church and serve his mission.

His faith is sorely tested when the church board sends a young representative to tell him that the parsonage is going to be put up for sale, precipitating a crisis of where to house himself and his sisters, Majel and Clovis. Logan appeals, raising the questions of service, faith and righteousness with the church board representative, but the facts are that in this world even a church must pay for itself, and in a town where the only source of revenue is “fracking,” land is only good for its mineral rights.

Meanwhile, Clovis and Majel are adding to Logan’s woes. Majel has been emotionally traumatized and dependent on Logan since her husband disappeared on the first morning of her honeymoon many years ago. Opinionated Clovis has been ejected from the home of her son. Neither seems to be capable of caring for herself.

Carla-Rae as Majel delivers wry lines quietly. Clovis, as portrayed by Ellen Dostal, is simple and annoying. Tyler Cook as board member Justin Lawrence and Robert Owens-Greygrass as Rope, a native American cowboy, acquit themselves well in stock characters.

Events move toward a predictable outcome, and that’s the problem of the play. It is a moving telling of a story that may be playing out in many places to real people, but it lacks the urgency that makes arresting drama. Each character is a single note, and while their inability to change their lives or effectively challenge their adversaries may be true to life, it’s tepid theater. No one really does anything.

The set design by Susan Baker Scharpf — spare and skeletal — is very effective in laying out the landscape of life in Ropesville.  Lighting designer R. Craig Wolf casts a believable pall of dustiness over the set.  Noteworthy are the costumes by E. B. Brooks, especially the gowns that hang listlessly on Carla-Rae’s frame. Kudos to props designer Shannon Dedman and sound designer Sean Kozma.  Caisley set a pace that avoided pitfalls that could have made the play feel glacial in its unfolding.