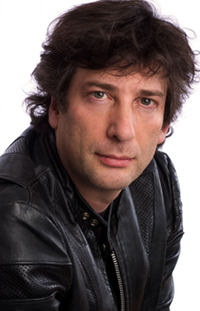 The film adaptation of his Coraline is Oscar-nominated for Best Animated Feature Film, his Graveyard Book won 2009’s Newbery Medal, and his bees won him a blue ribbon for honey in the county fair.  Neil Gaiman, ladies and gentlemen, is a talented man.

During his appearance at UCLA Live on Feb. 4, Gaiman assured the audience that beekeeping actually requires very little effort at all.  The Graveyard Book, on the other hand, took years.  In a smooth reading and lecture, the English author of crossover books and collaborations read from several of his works, intermittently mapping his career.  This included the story of filial favor from his now-grown son’s playtime in a graveyard – inspiration for his prize-winning novel, years in gestation, marketed for youth literacy and read in excerpt to an enraptured Royce Hall.  Recent changes in the publishing industry played no small part in the story, as Gaiman was quick to point out.  But even with the complexities of book marketing, there was also mention of a recent World Book Day, a charitable encouragement in the UK and elsewhere for children to buy books.  His Odd and the Frost Giants was written at a publisher’s request, then sold for £1 each to children who’d been given £1 book tokens; then, pleasingly, read from as part of the lecture.

Often working as the author of comics, “a medium mistaken for a genre,” Gaiman has helped to expand the realm and readership of graphic literature.  (His Sandman series remains a cornerstone of the style.) Gaiman’s works have a whimsical and dark tonal unity and a strong-held place in contemporary literature with audiences young and old.

Perhaps the most pleasant aspect of the reading and lecture, apart from Gaiman’s disposition, was its structure.  Before the house lights dimmed, audience questions were handed in on cards (“what are the voices in your head telling you now?” was at the stack’s top).  He answered about upcoming collaborations (Stephin Merritt from The Magnetic Fields), thematic habits (children make for “beautifully clear-eyed” protagonists), and what kind of tea he drinks (“English Breakfast…  Oh, what a boring answer!  I drink tea picked by small monkeys, and they bring it to me!).  Faced with a query about whether he believes in magic, Gaiman quietly noted himself to be “a creature of flexible belief” and politely demonstrated himself to be a creature of immeasurable talent and skill.