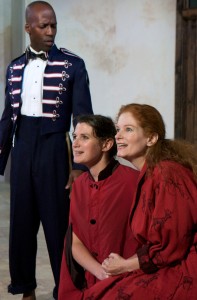 The red drape parts to reveal a voluptuous young woman, naked in a bathtub. A serene instrumental by Henry Purcell underscores her happy, stream-of-consciousness musings, and falling rain shimmers softly outside the window. The scene is pure Renoir.

The dreamlike introduction to Phyllis Nagy’s “Never Land,” in its American premiere at Rogue Machine Theatre, weaves an intriguing spell. As the scene plays on, one is drawn into a vaguely eerie world inhabited by gracefully unraveling drawing room characters.

Nagy’s heightened language and uncommon use of a three-act structure give her play about a luckless family of misfits the sound and feel of a concerto. The breezy allegro of the first ‘movement’ gives way to a quiet larghetto, accelerating inexorably to the finale.

Henri Joubert, a Frenchman who tolerates his life only through his fantasies of becoming English, comes apart at his carefully stitched seams when his dream turns to nightmare. A Chaplinesque Bradley Fisher is riveting as the earnest and bewildered Henri, tragically resisting, and ultimately heroically embracing his destiny.

Katherine Tozer, imported from England for this show, plays the Jouberts’ daughter, Elizabeth, who copes with her own evaporating dreams by retreating into religious ecstasies, visions, and fairy-tale romances. Tozer brings an appealing earthiness, unforced wit, and quiet pathos to this airy creature. Her mellifluous voice and perfect diction in the Noel-Coward-on-acid dialogue are sheer pleasure.

As Anne Joubert, Lisa Pelikan delivers a subtle blend of fragile despair and cruel irony. Her classic features and long red hair enhance Nagy’s portrait of faded beauty clinging to memories of former glory. “I could have had a handsomer man, a wealthier man,” Anne explains, drowning her disappointment in alcohol, as the rain becomes a downpour.

Shannon Holt, as a vacationing English neighbor, manages to be funny merely by stepping on stage. Holt’s engaging portrayal of Heather Caton-Smith produces huge laughs, lulling her audience into a jolly sense of security before stabbing it through the heart. Christopher Shaw is excellent as Heather’s clueless English gentleman of a husband, Nick. Insulated by comfortable narcissism, Nick is defenseless when faced with knowledge of the damage he wrecks on those around him.

The luckless Jouberts’ final surrender affirms Love as Siren, beckoning her oblivious victims to shatter and drown on her rocky shore. Yet this hapless family’s shipwreck is, ultimately, a victory because, at the end of everything, they have loved each other.

The set by Frederica Nascimento, costumes by Swinda Reichelt, lighting by Jared A. Sayeg, and sound design by Cricket S. Myers all ably serve this production. Tech wizard David Mauer makes the rain.

Phyllis Nagy’s “Never Land” had its premiere at London’s Royal Court Theatre, was translated into more than 20 languages, and was produced throughout Europe. This first American production is directed by Nagy herself.  “Never Land” is on now through Nov. 15 (Thursday, Friday, and Saturday at 8 p.m., Sundays at 2 p.m.) at Theatre/Theater, 5041 W. Pico Blvd, LA. Tickets online at www.roguemachinetheatre.com.