Nixon in China – in Long Beach 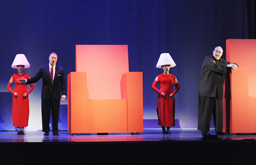 After a few seasons of scaled-back projects in more intimate venues, Long Beach Opera took a gamble and scored a success last weekend, opening John Adams’ first opera, Nixon in China, at the Long Beach Terrace Theater on March 20. The production boasts a stunning cast and chorus, with strong staging and choreography.

All of the artists were vocally perfect for their roles. What a pleasure to hear John Duykers, who created the role, sing the part of Mao Tse-Tung. Michael Chioldi captured the persona of Richard Nixon, portraying the multi-faceted, complex man with vocal and acting facility. Suzan Hanson was charming and compelling as Pat Nixon. Roberto Gomez brought a calming presence in his portrayal of Cho En Lai, and his closing aria “I Am Old” was deeply moving. Only with Ani Maldjian’s show-stopping aria “I Am the Wife of Mao Tse-Tung!” was I aware of the sound system. While her light coloratura voice maneuvered the challenging aria beautifully, her voice was amplified to the edge of distortion.

Henri Venanzi’s preparation of the chorus was impeccable. The 36-singer ensemble was precise, with clean diction and a vibrant sound. Jenny Weston’s choreography brought a vital intensity to the Act 2 ballet. My favorite element of Wilhelm Holzbauer’s sets were the oversized stuffed red chairs, which were repositioned to enhance the interaction of the characters and the subtleties of the text.

There were a few minor bothersome production values that could easily be remedied. Those of us who grew up watching the Nixons on television cannot see Pat Nixon as a red head. Please get Suzan Hanson a blond wig! I was seated right of center, and sightlines need to be checked so that the Air Force One plane is completely concealed. I have such a strong memory of the LA Opera production from 20 years ago that I had a difficult time accepting the “morning after the banquet” context for the final scene. I recall separate bedrooms, which created a sense of intimacy that was lost in the larger environment.

This is a rare opportunity to see a strong production of a masterpiece of American Opera. The final performance is Sunday, March 28, at 4 p.m., at the Terrace Theater. For information, call (562) 432-5934 or visit www.LongBeachOpera.org.